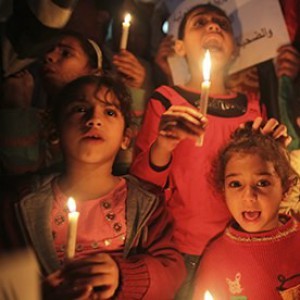 Gaza is becoming uninhabitable as humanitarian conditions deteriorate rapidly following Egypt's destruction of smuggling tunnels and Israel's renewed ban on the import of construction materials, the United Nations and aid agencies have said.

A year after the end of the eight-day war between Gaza and Israel last November, the UN said the situation in the tiny coastal strip was worse than before the conflict. "Initial hopes for a significant improvement on the ground have not been realised," said James Rawley, the UN's humanitarian co-ordinator for the Palestinian territories.

Gaza is facing a power crisis as a result of a shortage of fuel, with blackouts lasting 12-16 hours a day, according to Oxfam. Raw sewage has flooded streets in some areas of Gaza City following the closure of Gaza's only power plant on 1 November, which made pump stations inoperative. Factories have been forced to cut production, leading to layoffs, and hospitals are running on emergency reserves.

Oxfam said only 40% of Gaza's fuel needs were being met and consumer prices for petrol and diesel had doubled. Less than 400,000 litres of fuel a day enter Gaza through official crossings, compared with 1m litres a day that were smuggled through the tunnels.

Egypt's closure of the tunnels has exacerbated an already precarious situation. "Ordinary people in Gaza are struggling to find work and feed their families while the blockade remains in place," said Nishant Pandey, of Oxfam. More than 80% of Gaza's 1.7 million inhabitants are in need of humanitarian aid and 65% of families are expected to be food insecure by the end of the year, according to the charity.

Since the tunnel closures in June, the prices of many basic foodstuffs have risen. Unrwa, the UN agency for Palestinian refugees, said the cost of rice was up 26%, sugar 14% and sunflower oil 13%.

Gaza's construction industry has also been severely affected by the tunnel closures, resulting in the loss of thousands of jobs in the private sector.

In addition, Israel last month halted the import of building materials through the crossings it controls, after the discovery of a sophisticated tunnel built by Hamas militants from Gaza to Israel. According to the Israeli military, it was constructed using materials that Israel had permitted to enter Gaza.

As a result of the renewed ban, 19 out of 20 construction projects – including 12 schools – initiated by Unrwa have ground to a halt, putting at risk thousands more jobs. Unwra said Israel's action was collective punishment, which is illegal under international law.

"Once more, Gaza is quickly becoming uninhabitable," said Filippo Grandi, the agency's commissioner-general. "Perhaps strengthening the human security of the people of Gaza is a better avenue to ensuring regional stability than physical closures, political isolation and military action."

The conflict's anniversary was marked with limited rocket fire from Gaza, after a year in which the number of missiles launched into Israel fell to 67, compared with 641 in the previous 12 months. The Israeli air force responded with air strikes on military targets inside Gaza.