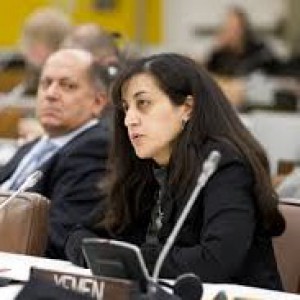 I apologize for requesting the floor once again, however, I am compelled to reply to the statement made by the representative of Israel in today’s debate.

As we stated at the outset of this debate, the report of the Special Committee is neither biased, nor one-sided. The Special Committee’s examination of the situation is clearly in the framework of international and relevant United Nations resolutions.

There is NO distortion of the truth. There is no “discrediting” of Israel by the Committee; the Committee is reporting FACTS – facts regarding the egregious, systematic violations – many amounting to war crimes – being perpetrated by Israel, the occupying Power, against the Palestinian people under its occupation. Its blatant, deliberate, consistent non-compliance with international law and its complete disrespect for the UN and the international community are what single Israel out. And, yet, Israel continues to try to justify its violations, distorting the truth and attack those who speak it.

In this regard, I wish to stress: no amount of merely “easing restrictions” will resolve this conflict. Lessening the crime, while still committing the crime, is a flawed and destructive logic. Only recognition of the rights of the Palestinian people and a definitive end to this illegitimate occupation can lead to a viable, just solution by which peace between Palestine and Israel can be realized and by which the Palestinian people can truly know the freedom, peace, security and dignity they have been denied for decades by this Israeli occupation, which has been perpetuated on the basis of the same empty and offensive pretexts we have heard again here today. This includes the claim that ending this belligerent military occupation is a “compromise” on Israel’s part, rather than constituting actual respect for UN resolutions and international law and respect for the right of the Palestinian people to self-determination.

The position of the international community regarding Israel’s illegal policies and practices in Occupied Palestine is clear. It is reflected here in the statements before this Committee, in the statements before the Security Council on this issue, and in the overwhelming, principled support by the General Assembly for the resolutions in this regard. These are the clearest answers to Israel’s derisive rhetoric and intransigence, to its rejectionist stance regarding the rights of the Palestinian people, and to the same old caustic Israeli arguments repeated here today.

The international community must remain firm in rejecting these arguments and demanding compliance with international law and UN resolutions. This is what will actually, ultimately lead to the achievement of a just, lasting Palestinian-Israeli peace – a goal to which the Palestinian people and their leadership are committed, and this commitment is unquestionable.

I thank you, Mr. Chair, and thank the Committee Members for their patience and for the compelling statements of support for Palestine made in this debate.