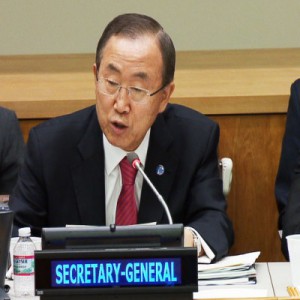 Following is UN Secretary-General Ban Ki-moon’s message, delivered by Deputy Secretary-General Jan Eliasson, to the observance of the International Day of Solidarity with the Palestinian People, in New York on 25 November:

This annual Solidarity Day is an opportunity to reflect on the critical situation faced by the Palestinian people and to consider our collective contributions and responsibilities as Governments, international or civil society organizations, towards Israeli-Palestinian peace. I appreciate the efforts of the Committee [on the Inalienable Rights of the Palestinian People] to keep the international community’s attention and focus on the question of Palestine.

This year’s observance takes place as Israeli and Palestinian negotiators work together towards the agreed objective of a peaceful, comprehensive settlement on all permanent status issues. I call on all in the international community to support the parties in this ambitious endeavour to fulfil the two-State objective, bringing about an end to the conflict. All parties must act in a responsible way and refrain from actions that undermine the prospects for successful negotiations.

I am alarmed by the increasingly dangerous situation on the ground. There has been an escalation of violence and incitement. Although I welcome Israel’s release of prisoners as part of the agreement to renew talks, its settlement activity in the Occupied Palestinian Territory continues and remains a cause for very grave concern. Announcements of thousands of new housing units cannot be reconciled with the goal of a two-State solution and risk the collapse of negotiations. Settlements are in violation of international law and constitute obstacles to peace. All settlement activity in the West Bank and East Jerusalem must cease. Measures that prejudge final status issues are not to be recognized.

Meanwhile, Palestinians continue to be displaced through house demolitions in Area C of the West Bank and East Jerusalem. Of particular concern are developments in East Jerusalem, where, this year alone, some 100 structures have been demolished, displacing 300 people. Hundreds more Palestinians are at risk because their homes were built without Israeli-issued building permits. This underscores the importance of Palestinian access to a fair planning and zoning regime. I remind Israel of its obligation to protect the population under occupation.

The situation in Gaza remains a source of serious concern. I reiterate my condemnation of all rocket fire into Israel, as well as of the construction of tunnels into Israel by militants. Following the recent tunnel discovery, Israel suspended the transfer of construction material into Gaza, including for humanitarian projects. While I recognize Israel’s legitimate security concerns, I urge Israel to ensure that the needs of the civilian population in Gaza are met.

The United Nations Relief and Works Agency (UNRWA), a lifeline for millions of Palestinians in Gaza, the West Bank and the region, continues to face serious financial difficulties. I call on all donors, including new ones, to make or increase contributions to sustain UNRWA’s vital and indispensable operations.

Palestinian unity based on the commitments of the Palestine Liberation Organization and the positions of the Arab Peace Initiative is essential for the two-State solution. I urge the Palestinians to overcome their divisions without delay in the interest of unity.

The goal remains clear — an end to the occupation that started in 1967 and the creation of a sovereign, independent and viable State of Palestine based on the 1967 borders, living side by side in peace with a secure State of Israel. Jerusalem is to emerge from negotiations as the capital of two States, with arrangements for the holy sites acceptable to all. An agreed solution must be found for millions of Palestinian refugees around the region.

This past September marked the twentieth anniversary of the Oslo Accords. After two decades of talks and far too many adverse developments on the ground, I urge Palestinian and Israeli leaders to take the decisions that will usher in a political solution to this serious and long-standing conflict. The United Nations, through its engagement with all relevant partners, including within the Quartet, stands ready to contribute to this process and to the two-State solution.

We cannot afford to lose the current moment of opportunity. I ask all in the international community to work together to translate the solidarity expressed on this occasion into positive action for peace and justice.