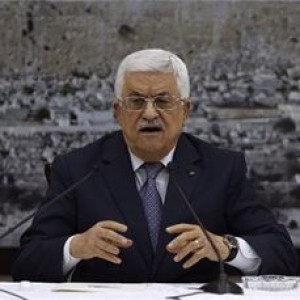 RAMALLAH (Ma'an) -- President Mahmoud Abbas warned Israel on Wednesday against turning the Palestinian-Israeli conflict into a religious war, stressing that recent attacks on Muslim worshipers in the Al-Aqsa mosque threatened to nature of the national struggle.

Abbas said in a televised statement from his presidential headquarters in Ramallah that Palestinians and "the world know the dangers of using religion in political conflicts; we must all see what goes around us and Israel must pay attention and understand that such steps are dangerous to both Israel and others."

He added that Israel's attempts to open a second gate for Jews to enter the compound, altering the religious status quo, was a provocation about which Palestinians "could not remain silent."

Abbas also warned that the same kinds of provocations are happening at the Ibrahimi mosque in Hebron, where worshipers are prevented from praying inside "as if Israel wants to completely cancel the Islamic existence of the mosque."

The Ibrahimi mosque has been split into a Jewish section and a Muslim section since a Jewish extremist opened fire and killed more than two dozen worshipers there in 1994.

"Palestinians will not remain silent," Abbas said. "Clashes happen every day, and Palestinians get wounded and killed in order to resist Israeli violations of the al-Aqsa and Ibrahimi mosques."

Abbas' remarks came after clashes broke out at the Al-Aqsa Mosque compound between Palestinian worshipers and Israeli police officers earlier in the day, leaving dozens hurt.

Security guards at the mosque told Ma'an that Israeli forces stormed the compound at 7:30 a.m. ahead of expected visits by right-wing Israelis on the occasion of the Jewish holiday of Sukkot, or the Feast of the Tabernacles.

Israeli forces forcibly removed worshipers, attacking some of them with clubs, the guards said.

Some Muslim worshipers clashed with Israeli officers in the compound before managing to take refuge inside the mosque.

Some of the stun grenades were fired into the Al-Aqsa Mosque itself, causing a fire to break out, and fire fighters were not immediately allowed access to the area, al-Kiswani added.

"The compound is almost empty of Muslim worshipers, while Israeli forces allowed herds of extremists to storm it and move freely," he said.

Witnesses said that eventually Israeli forces succeeded in forcefully removing Palestinians from the compound, besides those who had taken refuge in the mosque itself.

Instead, they closed the doors of the mosque and locked them with chains, trapping worshipers inside, the witnesses said.

Since Tuesday morning, Israeli forces have restricted access to the Al-Aqsa Mosque, only allowing Palestinian worshipers aged 60 and up to enter.

Elderly men and women have had to leave their identity cards with the police officers at the entrances of the compound.