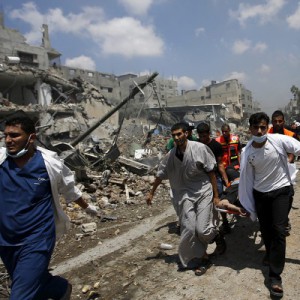 Australia's Muslim community is outraged at Israel's mass murder of civilians in Gaza. United in their grief and concern for the escalating conflict in Gaza, Muslim communities across Australia will hold a Prayer Vigil at 8pm tonight as they gather at
mosques. It is expected that approximately 150,000 people across the country will join the Prayer VigiL .

The community is deeply disturbed by the Australian government's silence. Sixteen days on and the international community, including Australia, remains largely silent as the Israeli army continues its deadly assault on Gaza. Over 650 innocent women, children and men have been killed in just 16 days. Entire families have been wiped out, hospitals bombed, and homes and suburbs destroyed. Indeed, the United Nations High Commissioner for Human Rights yesterday expressed the view that Israel may be guilty of war crimes."

Australia's Muslim community condemns in the strongest possible terms the gross and disproportionate military assault by lsrae l- a military juggernaut and covert nuclear state- against the Palestinian people it occupies, besieges and controls. More than 1.5 million Palestinians are crammed into 140 square miles, the most densely populated area in the world. Israel controls Gaza's airspace, waters and borders and has imposed a crippling blockade over Gaza.

The community repudiates Israel's claims to be acting in self defence. " II is sinisler propaganda 10 suggest Ihal Israel is acting in self-defence when it is raining down lonnes of bombs on a besieged, impoverished, defenceless populalion who, because of
Israel 's blockade, are unable to even escape or flee," says Randa Abdel-Fattah of Pray for Gaza.