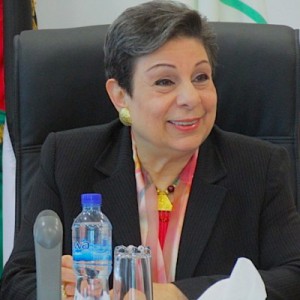 “Netanyahu’s speech at the UN was a blatant manipulation of facts and attempted at misleading the audience through a combination of hate language, slander and argument of obfuscation. On the one hand he attempted to create an image of an unreal polarized world in which the “forces of evil” are lumped together under the title “militant Islam” blurring any distinctions among different players, including Hamas and Iran, while placing Israel in the opposite pole as a force for “light, morality and justice.”

Obviously Netanyahu has lost touch with reality, particularly in refusing to acknowledge the fact of the occupation itself or the actions of the Israeli army of occupation in committing massacres and war crimes, which has been a longstanding manifestation of Israeli “double talk.” Rather than attacking President Abbas and the UN Human Rights Council for calling things by their name and deploring the horrific actions of the Israeli occupation, he should have acknowledged the enormity of the crime and taken responsibility for the actions themselves. The UN podium would have been the most appropriate place for Netanyahu to announce his acceptance of all relevant UN resolutions and his adherence to international law and universal human rights. Instead, he persisted in compounding the error by justifying Israeli violations and launching a vitriolic attack against the victims of the ongoing occupation.

He further attempted to circumvent the imperative of addressing Palestinian rights and the need to withdraw to the 1967 borders to establish the two-state solution by reversing the order and seeking partnership with the Arab world instead, thus buying more time to create facts that will destroy the chances of peace for the foreseeable future. The source of the conflict is Israel’s occupation of Arab lands, particularly Palestine, and the ongoing cruelty and injustice practiced against the Palestinian people.

By creating false analogies between the Nazi concept of “master race” and his view of militant Islam as upholding a “master faith” he is extending in effect the analogy to Israel as a “master state.” Blaming the victim has always been the failed policy of the politically and morally bankrupt, and Netanyahu is no exception.”