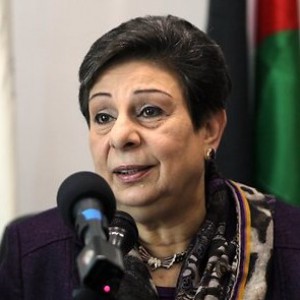 A few days ahead of the British parliamentary vote on the recognition of the State of Palestine, PLO Executive Committee member, Dr. Hanan Ashrawi, met with correspondents from British media outlets in Palestine to reiterate the official call of the PLO for all states to recognize the State of Palestine as a “human, moral, legal, and political imperative.”

Dr. Hanan Ashrawi said, “We welcome and appreciate the initiative of a group of British parliamentarians to ask their government to recognize the State of Palestine. If the British parliament vote reflects British public opinion, it will support the motion. This would be the first clear step taken by the UK as part of the process of historical rectification of the disastrous consequences of the Balfour Declaration and the British Mandate over Palestine that ended in 1948 with the creation of the State of Israel.”

“During the past few weeks we have received many messages from British friends representing political parties, civil society, churches, and others in support of the motion to recognize the State of Palestine. We call upon all of them to pursue such efforts in order to obtain a victory on October 13 for the universal cause of justice in the British Parliament. Regardless of the non-binding nature of the vote, it will have a significant impact on the British government’s policies and upcoming decisions on Palestine.”

“We utterly reject the position of those who insist that Palestinian sovereignty is subject to Israeli approval; our independence is a natural right as per international law, and it high time for freedom and justice to prevail,” concluded Dr. Ashrawi.