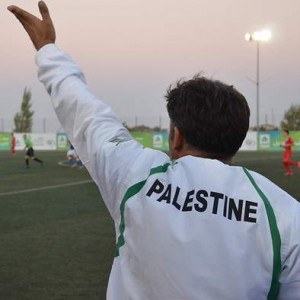 25 Aug 2014 , the challenge facing Palestine's footballers is not just confined to the pitch. Over the next few days I will share some of the stories, both heartbreaking and uplifting, of a footballing nation largely unknown outside its own region, but one that, through all the adversity it has faced, will take its place in Australia for the 2015 Asian Cup.

I first met my friend, Munzher, several years ago when I travelled to Palestine to do research for a book I'm writing on Asian football.
That day he was working one of his numerous jobs to make ends meet – as many involved in Palestinian football do - as a football commentator for a local TV station.
The 'studio" was an enclosed concrete room under a staircase where he was calling the match off a flickering old TV – not a suit or corporate logo in sight.

We got talking at half-time and without any hesitation he invited me into his world, taking me to matches in Ramallah, driving me to Bethlehem to meet players, arranging interviews with officials in the FA and taking me to stay with his family in the small village of Deir Abu Mash'al.
There we ate together as a family, went to a local wedding where I, unwittingly, became the dancing guest of honour and talked for hours about football and the difficulties of playing and organising such a simple game throughout the Palestinian territories.
That time was one of relative calm.
Relative, in the sense that Palestinians have become accustomed to the barriers, both real and figurative, that have been placed before them.
The refusal of Israel to allow players to travel freely for training camps between the West Bank and Gaza, the constant obstruction and delay of building much needed training grounds and stadia and the more sinister outcomes – players being maimed and killed.
Others have been allegedly kidnapped and detained without charge.
Despite these impediments Palestine booked the 16th and final place in next year's Asian Cup by winning the AFC Challenge Cup, held in the Maldives in May.

It was a tournament that presented further obstacles, including the exclusion of a host of foreign-based players - as all bar the last two matches fell on non-FIFA dates - and the rather astonishing requirement to travel to daily training sessions by boat after being housed on an outlying island.
The success, unexpected in many quarters, prompted an outpouring of emotion and the players were feted as national heroes upon their return to, firstly, Jordan and then Ramallah.
The scenes at Queen Alia airport, south of the Jordanian capital, were particularly poignant.
Palestine remains one of the few regions on earth not to have its own airport but, with a huge refugee population in Jordan, many claim that gateway as their own.
It's worth noting that there was a far greater presence to welcome the victorious Palestinian side compared to when Jordan reached the final round of World Cup qualifiers a year or so earlier.
This simple journey to or from 'home' is one that not many nations through the vast reach of FIFA have to experience and any travel in or out of the West Bank must almost always involve an arduous trip through the rocky outcrops near Jericho and past the tedious King Hussein/Allenby Bridge border crossing then onwards to Jordan.
From Ramallah to Amman is barely 100 kilometres yet it's an 'adventure' that, on a good day, will take the better part of six or seven hours.
It was this journey that I recently took once again at the urging of Munzher, to come and see, first hand, what was happening as Palestine was once again under fire.
Over the coming days I'll attempt to share this journey through the stories, both uplifting and not so, of players, fans, clubs and officials.
Stories from a footballing nation largely unknown outside its own region yet this week jumped to its highest ever FIFA ranking.
A nation that dreams of putting aside the sound of rocket and gun-fire to cause another footballing upset in January in Australia.