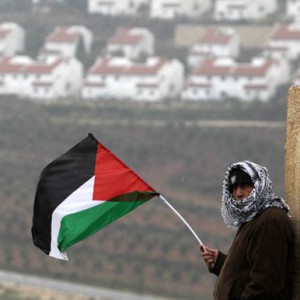 Locals told Ma'an that soldiers deployed at the military checkpoint at the entrance to the village delivered confiscation orders signed by the Israeli military commander in the West Bank Nitzan Alon that gave them until Dec. 31, 2017 to remain on their land.

Villagers said that soldiers informed them that an official from the Israeli military liaison would arrive on Monday to specify which lands that would be confiscated, adding that the lands confiscated would be used for "military purposes."

If carried out, the confiscation would dramatically reduce the land available to Beit Iksa's 1,700 people, the majority of whom are refugees who fled to the area in 1967 after the existing population of the village was forced to flee by Israeli authorities.

Although located immediately next to Jerusalem, the village's lands have been progressively confiscated and the village is surrounded on all sides by the Israeli separation wall. Villagers can no longer travel to Jerusalem without permits, and Palestinians not resident in Beit Iksa cannot enter the single Israeli checkpoint that allows access to the village.

Ninety-three percent of the village is under full Israeli military control, and a majority of the total land of the village falls in areas outside of the separation wall, meaning they have been de facto confiscated, including about 1,500 dunums (371 acres) where Jewish-only settlements have been built.

The head of the Beit Iksa village council Saada al-Khatib told Ma'an that according to the order and the maps that soldiers had shown them Saturday, the lands that will be confiscated are between parcels 7 and 8 and include Haraeq al-Arab, Thahr Biddu, Numus, and Khatab areas around the village.
Al-Khatib added that the Israeli authorities claim that the confiscation order has been under way since 2012, and that the new order issued on Saturday only emphasizes the old order.

The order will prevent dozens of farmers from reaching their lands, he said, calling upon Palestinian ministries and national institutions to support the village of Beit Iksa and its neighbors.

He added that the order came after the Israeli municipality announced the approval of 244 housing units to be built in the Ramot settlement, which was previously built on lands confiscated from the settlement.

Al-Khatib warned that the land confiscation orders being issued to many villages include his own aim to carry out the "Judaization" of Beit Iksa after sealing the village shut and surrounding it with a checkpoint and the separation wall, turning it into an 2,500-dunum prison.