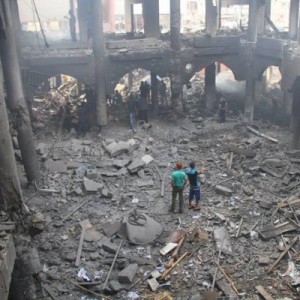 OVERVIEW
Statistics after 50 days of the Israeli aggression against the Gaza Strip (July 6th – August 24th).
Within the last 24-hours, Israeli occupation forces killed at least 13 Palestinians and injured more than 38. Israeli warplanes relentlessly bombed on Saturday the Zafer Tower, a 14-story building which consists of 45 apartments. As a result at least 17 people were injured, including women and children and 45 families have been displaced.
As Israel continues its deliberate attacks on the defenceless Palestinian civilians in Gaza, the death toll has risen to 2105 and more than 10,640 wounded. Among those killed are at least 567 children, 259 women and 100 elderly.
"69% of UNRWA and Government Schools are damaged by Israeli Assaults"
At this time of the year, Palestinian children prepare to begin the new school year. But at least half a million of Gaza’s children will not begin the school as scheduled. The opening of schools for Gaza’s children is delayed until further notice. Israel’s ongoing assault has significantly damaged at least 277 Governmental and UNRWA schools. About 30% are still being used as shelters for displaced families. 1

The international community must hold Israel responsible for its crimes
Statistics of 50 Days of Israeli Aggression against the Gaza Strip
July 6that 00:00 AM – August 24th at 12:00 PM2

Not less than 600,000 people are displaced (almost one third of the Gaza population) –1,700,000 people (the entire population of the Gaza Strip) have been affected by the destruction of electricity, water and waste water infrastructures.
Israeli disregard to the lives of Palestinians has resulted in the killing of hundreds. Instead of learning from previous experiences, some countries gave green light to Israeli forces to bombard and invade the Gaza Strip. The international community has the legal and moral responsibility to protect the Palestinian population living under Israeli occupation and to hold Israel accountable regarding its severe violations of the international humanitarian law. Lack of accountability will continue to fuel Israeli atrocities and crimes. Lack of international action will continue to increase the list of people killed, injured and displaced.