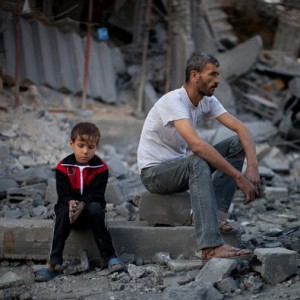 OVERVIEW
Statistics of day 34 of the Israeli aggression against the Gaza Strip (July 8th – August 10th).
Israeli attacks against the Occupied Gaza Strip continued after Israel withdrew its delegation from the ceasefire negotiations in Cairo, Egypt, killing at least 16 Palestinians and injuring at least 86 people. Overnight airstrikes alone targeted the southern cities of Rafah and Khan Younis killing 3 Palestinians including a thirteen years old girl and a fourteen years old boy.
Since July 8 Israeli Forces have killed over 1916 people (including at least 449 children, 243 women and 87 elderly) and injured over 9870 people (including at least 3004 children, 1907 women and 359 elderly). Israel deliberately continue to target civilians. At least 16,735 buildings are not inhabitable and another 41,420 buildings have been damaged. At least 277 schools have been damaged by Israeli attacks; including: 141 government schools and 136 UNRWA schools.
Over 485.000 people began to return to their areas of residence, in many cases to find their homes completely destroyed or simply not fit for living. There is no safe place for civilians in Gaza. Public and private sectors, including schools (governmental, UNRWA and private), places of worship, hospitals, ministries, heritage sites, factories, agricultural areas, fisheries and farms among others were all targeted and extensively damaged. Many of those who returned to their homes are fleeing once again due to the resumption of the attacks.
The international community must hold Israel responsible for its crimes.

Over 485,000 people have been displaced (almost one third of the Gaza population) –1,700,000 people (the entire population of the Gaza Strip) have been affected by the destruction of electricity, water and waste water infrastructures.
Israeli disregard to the lives of Palestinians have resulted in the killing of hundreds. Instead of learning from previous experiences, some countries gave green light to Israeli forces to bombard and invade the Gaza Strip. The international community has the legal and moral responsibility to protect the Palestinian population living under Israeli occupation and to hold Israel accountable regarding its severe violations of the international humanitarian law. Lack of accountability will continue to fuel Israeli atrocities and crimes. Lack of international action will continue to increase the list of people killed.