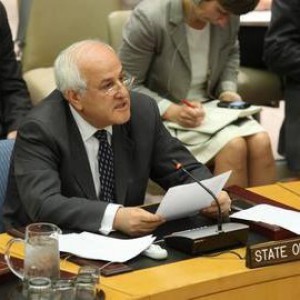 The Permanent Observer Mission of the State of Palestine welcomes the announcement made on 10 November 2014 by the Secretary-General of the United Nations, Mr. Ban Ki-moon, to establish an internal and independent United Nations Board of Inquiry to investigate certain incidents that occurred in the Gaza Strip between 8 July and 26 August 2014.

We express the hope that the work of the Board will begin forthwith towards establishing accountability for the serious violations perpetrated in this regard during the more than fifty days of the Israeli military aggression against the Gaza Strip in July and August 2014 that caused vast human and physical devastation. In this regard, we recall that this Israeli aggression resulted in the killing of more than 2,180 Palestinians, the overwhelming majority civilians, including at least 516 children and 283 women; the injury of more than 11,000 Palestinians, and damage to over 80,000 homes, with 20,000 homes either completely destroyed or damaged beyond habitation; the massive displacement of the Palestinian civilian population, with more than 110,000 people rendered homeless; the destruction of vital civilian infrastructure; and damage and destruction to UN premises, including UNRWA schools, where many civilians lost their lives in Israeli attacks.

The State of Palestine urges the Board of Inquiry to conduct its work in the most meticulous and transparent manner and assures the United Nations of its full cooperation with the Board in the implementation of its mandate. We await the expeditious release of its findings towards the pursuit of accountability and justice for the Palestinian victims as well as to ensure reparations to the UN for damage to its properties caused by Israel, the occupying Power, for which it must be held liable.