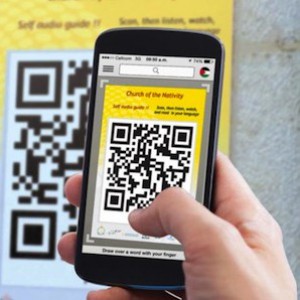 Sina Institute at Birzeit University, with the Centre for Cultural Heritage Preservation (CCHP) and University of Trento from Italy through its spin-off company OKKAM s.r.l, have deployed an innovative and pioneering electronic tourist guide for heritage sites in Bethlehem, using QR technologies. The initiative is part of the EU FP7 funded SIERA project.
The goal of the initiative is to enhance the experience of Palestine’s visitors and valorize the cultural heritage of Bethlehem City, through an innovative use of smartphones and tablets.
While walking in the old city, tourists can scan a QR code with smartphones and automatically listen to an audio guidance in their own language, as well as watch video and read further description, about a certain heritage site.
The initiative targeted 8 important locations of cultural and heritage significance in the city, including the Church of Nativity, MangerSquare, and Star Street, among other locations.
Mrs. Nada Atrash, the Head of the Research and Training Unit at CCHP, indicated that the initiative stands as an innovative and simple facility to provide and spread information and guidance to the visitors of the city,refuting some parts of the Israeli propaganda that strives to damage the Palestinian history and culture. Mrs. Atrash indicated that the system has been used by hundreds of tourists already, despite its young age, where the freeinternet connection provided by Hadara ISP facilitated the adoption of the system.
The initiative has also been praised by Dr Hamdan Taha, the deputy minister of the Palestinian Ministry of Tourism and Antiquities. Dr Taha expressed the ministry’s interest at the initiative, and hoped to extend its coverage to span the different touristic places in Palestine. Dr Taha also indicated that the initiative goes along the ministry’s plans to digitize and document the Palestinian narration through modern technologies, which should enrich the tourism industry in Palestine.
Dr Mustafa Jarrar, the director of Sina Institute at Birzeit University, stated that the QR scanning technologies has already been deployed at several domains. However, utilizing such technology within a multilingual and multimedia touristic guidance system is considered pioneering worldwide. Dr Jarrar illustrated that the initiative comes about as a result of the cooperation with Trento University in Italy and OKKAM s.r.l, which also included the Arabization of the OKKAM named entities system and enriching it with new Arabic content. Dr Jarrar concluded by stating that the initiative is still at its early stages, and hoped to extend the initiative for the remaining Palestinian sites.
After deploying the system in Bethlehem, Dr Paolo Bouquet, the professor at Trento University and the president of its spin-off company OKKAM s.r.l, expressed his contentment for the innovative and pioneering utilization of OKKAM’s platform within the tourism sector, and in Palestine in particular. Dr Bouquet explained that the system allows for dynamic content editing andmodification, without having to replace the generated code. Moreover, the system doesn’t require any special software, where it can be used with any QR reader applications.
It is worth noting that, the developed system, in cooperation with OKKAM’s dynamic ObjectLinks framework, allows for bundling several media data and content types, accessible through a single QR code. The developed framework allows for dynamic content editing, which provides for efficient content generation and enhanced monitoring and statistics capabilities. The system was praised by the local and international tourists visiting Bethlehem, quotingthat the new system was simple and easy to navigate, while providing very rich and multilingual content.
The initiative is part of the SIERA project at Sina Institute, which aims to promote research cooperation with scientists around theworld in the fields of Multilingual and Multicultural knowledge sharing technologies. The initiative comes about as a result of this international cooperation in the domain of knowledge sharing, which also aims at promoting Bethlehem as a center of international cultural and heritage significance.