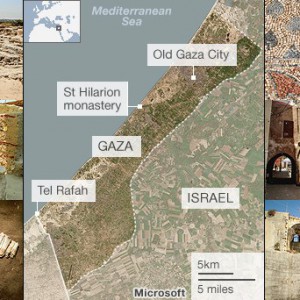 Her Excellency, Rula Ma’ayah, Palestinian Minister of Tourism and Antiquities, calls on the international community, especially the UNESCO, World Heritage Committee, ICOMOS, ICCROM, IUCN, ICOM, WAC, IAU and other international organizations to condemn the Israeli indiscriminate attacks against civilians and continuous violations of the international humanitarian law and the military targeting of cultural and natural heritage sites as war crimes and as intentional acts of destruction of cultural and natural heritage in violation of human rights.
The Ministry urges the member states of UNESCO and the Director General of UNESCO to take immediate measures to stop the aggression on civilians and the intentional destruction of cultural and natural heritage in the Gaza Strip, and appeals to the international community to support the establishment of a recovery plan that aims to safeguard the Palestinian cultural and natural heritage.
The cultural heritage of the Gaza Strip is an integral component of the cultural identity of humanity as a whole, and that of the Palestinians in particular. Its intentional destruction has adverse consequences on human dignity and human rights of the Palestinian people, and its destruction is a great loss for humanity.
Israel is in breach and violation of multiple international agreements such as the Hague Convention and Regulations of 1907, the Fourth Geneva Convention of 1949, and the Hague Convention and Protocol of 1954 for the Protection of Cultural Property in the Event of Armed Conflict. Additionally , to the UNESCO Recommendations on International Principles Applicable to Archaeological Excavations in New Delhi in 1956, Convention on the Means of Prohibiting and Preventing Illicit Import, Export and Transfer of Ownership of Cultural

Property, the 1972 World Heritage Convention and other resolutions and recommendations concerning cultural property in Palestine.
The military aggression on the Gaza Strip is a clear violation of the UNESCO declaration against intentional destruction of cultural and natural heritage.
Cultural heritage sites did not survive the attacks; several sites including archaeological sites, historical buildings, religious buildings, museums, cultural and natural landscapes and historic city centres were severely affected by the continuous shelling of these sites and their surrounding, with some irreversible damage either directly to the sites or to their settings. The consecutive attacks have also prevented the local authorities from fulfilling their duties in protection of cultural heritage sites.The damages have created a dangerous situation that is threatening the safety of the inhabitants near those sites.
The attacks have directly targeted sites of Potential Outstanding Value and that are already listed on Palestine’s Tentative List, in addition to other sites that are considered important on the local, national, and international levels. These sites include:
- Partial destruction of Tell Umm Amer (St. Hilarion in An-Nuseirat), a site that was established during the Roman Era and that appears on the Madaba map. The site dates back from the Byzantine to the early Islamic Period, and contains the ruins of the Monastery of St. Hilarion) – A site listed on Palestine’s Tentative List.
- Partial destruction of Anthedon Harbour – the Archaeological Site of Blakhieh and the Ancient Port of Gaza. The site was inhabited from the Neo-Assyrian until the Early Islamic Period – A site listed on Palestine’s Tentative List.
- Indiscriminate shelling on Wadi Gaza Coastal Wetlands; a natural reserve of biodiversity; namely birds – A site listed on Palestine’s Tentative List.
- Serious destruction of the historic urban centres in Gaza, Khan Younis, Rafah and Beit Hanoun, and severe damages to their fabric including the Islamic university compound, Deir Al-Ballah Technical College, Gaza University College and Al-Aqsa University Compound.

In addition, the destruction has affected directly cultural heritage monuments including Al-Saqa Palace and the historic market in Al-Shajaia.
- The serious destruction of the archaeological site of Tell Rafah; a site that dates back to the Bronze and Iron Ages located on the Palestinian Egyptian Borders.
- Serious destruction of places of worship and religious buildings; the shelling caused the total destruction of 41 mosques and the partial destruction of 120 mosques and shrines.
Some of the religious buildings that were totally damaged are:
- the Mamluk Mosque of Sayed Hashem
- the Mamluk Mosque of Zafer Domry
- the Omari Mosque in Jabalia – with evidence of Roman, Byzantine Church, and Medieval history
- the Shrine and Mosaic Floor of Abassan
- the Ottoman Shrine of Nabi Yousef in East Jabalia.
Some of the religious buildings that were partially damaged are:
- the Mamluk Shrine and Archaeological Site of Tell Al-Muntar (the site was also targeted in 2008 and 2012).
- the Byzantine Church of St Byrphoryious.
- the Historical Christian Baptist Cemetery.
Partial destruction was also caused to various cultural and archaeological sites including:
- Tell es-Sakkan; a Bronze Age site located in Zahra city.
- The Mamluk Court of Bardabikyia.
- The Byzantine archaeological site and museum in Jabalia.
- The Commonwealth Cemetery of WWII Warriors in Al-Tuffah Quarter
In addition, the shelling has caused severe destruction and irreversible damage to various cultural and natural landscapes throughout Gaza.