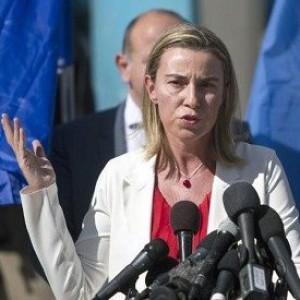 Her appeal, at a joint news conference with Palestinian prime minister Rami Hamdallah, came hours after the killing of an Palestinian with Israeli citizenship by police fanned tensions.

The shooting in northern Israel came after another night of clashes in East Jerusalem between youths hurling stones and firecrackers at police, who retaliated with rubber bullets, stun grenades, and tear gas.

The violence has spiked as Israel has pushed ahead with its policy to build Jewish settlements on lands the Palestinians want for a future state and against the background of efforts by Jewish extremists to secure rights to pray at Jerusalem's Al-Aqsa Mosque.

"Jerusalem is not just a beautiful city, the challenge is to show that Jerusalem can be shared in peace and respect," said Mogherini.

"It is not a Palestinian-Israeli situation, it is a global issue."

"Jerusalem is our capital and as such is not a settlement," he insisted.

Israel captured East Jerusalem from Jordan in 1967 and later annexed it in a move never recognized abroad.

Ma'an staff contributed to this report.