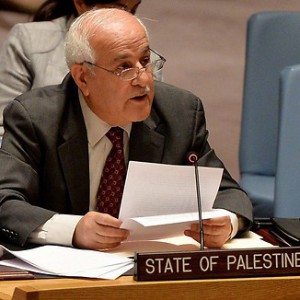 Although I have just submitted a letter to Your Excellency only two days ago, the intensifying aggression by Israel, the occupying Power, against the Palestinian people in the Occupied State of Palestine, including East Jerusalem, compels me to submit a follow-up letter today.  The Palestinian leadership appeals to the international community, particularly the Security Council, to act immediately to halt all Israeli violations of international law, including humanitarian law and human rights law, against the unprotected, defenseless Palestinian civilian population.  Below is a summary of those violations from just the past 24 hours.

The Palestine Red Crescent is reporting that more than 130 Palestinians, including children, have been injured by Israeli occupying forces, at least 50 injured by live ammunition, bringing the total number of Palestinians injured to 630 since Saturday, 3 October 2015, as the occupying forces continue their raids of Palestinian areas and attacks on civilians.  A large number of the injured are in critical condition, many who are undergoing lifesaving operations, including at least two Palestinians who were shot in the head with rubber bullets.  Since Friday, 2 October 2015, Israeli occupying forces have also carried out 27 attacks on Red Crescent emergency relief teams, leaving 17 staff members injured and 10 ambulances damaged.

Israel’s extremist settlers and religious zealots also continue their reign of terror on the Palestinian civilian population with complete impunity.  Since our last letter, extremist settlers injured at least two Palestinians, including Osama Abu Qubita, age 10, whose home they attacked in the south of Al-Khalil.  Osama had to be transferred to a hospital for treatment as a result of an injury to his head.  Also, today, a Palestinian girl, Shurouq Dwayyat, age 18, was seriously injured when she was shot by an Israeli settler in the Old City of Jerusalem.  Extremist settlers also intercepted the convoy of the Prime Minister of the State of Palestine, Dr. Rami Hamdallah, and shouted racist slogans while calling for the death of Palestinians.

In addition, Israel continues its campaign of repression and collective punishment against the Palestinian people under its occupation. Yesterday, 6 October, Israeli occupying forces demolished the homes of two Palestinian families and poured concrete into another Palestinian home just hours after the Prime Minister of Israel called for a “new process” to expedite home demolitions in a cabinet meeting and promised a “strong hand” against Palestinians and broader use of administrative detention. Moreover, a statement released by the Israeli Prime Minister’s office, on 5 October 2015, said that additional Israeli occupying forces had been deployed and were “going deeply into the Arab neighborhoods, which has not been done in the past.” The occupying Power also continued to illegally enforce a 48-hour ban on Palestinians from entering the Old City in Occupied East Jerusalem and worshipping at Christian and Muslim holy sites, including Al-Aqsa Mosque.  Meanwhile, Israelis, including extremist and violent settlers, as well as tourists continue to be permitted to enter the Old City and holy sites, including Al-Aqsa Mosque, with the protection and backing of the Israeli Government.

We call for urgent international attention to compel Israel to halt its illegal policies and practices, to ensure immediate protection to the defenseless Palestinian civilian population, and to prevent the situation from spiraling further out of control. The international community, in particular the Security Council, must call on Israel to end all of its violations against the Palestinian people.  It should be stated that it is the occupying Power – not the defenseless Palestinian people under its foreign occupation – that is exacerbating tensions and despair with its illegal policies and punitive measures and that has the power to de-escalate the explosive situation on the ground throughout the Occupied State of Palestine, including in East Jerusalem.

Israel can no longer be permitted to act as a State above the law. It is the duty of the Security Council to ensure that Israel comply by all of its obligations as an occupying Power under international law, including humanitarian law and human rights law.  Moreover, the obligation to respect and ensure respect of the Fourth Geneva Convention must be upheld by all High Contracting Parties.  Such respect is paramount for saving lives, stemming the dangerous deterioration of this situation and salvaging the prospects for peace.

This letter is in follow-up to our 555 previous letters regarding the ongoing crisis in the Occupied Palestinian Territory, including East Jerusalem, which constitutes the territory of the State of Palestine.  These letters, dated from 29 September 2000 (A/55/432-S/2000/921) to 5 October 2015 (A/ES-/10/xxx- S/2015/xxx) constitute a basic record of the crimes being committed by Israel, the occupying Power, against the Palestinian people since September 2000.  For all of these war crimes, acts of State terrorism and systematic human rights violations being committed against the Palestinian people, Israel, the occupying Power, must be held accountable and the perpetrators must be brought to justice.