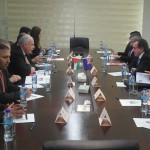 The Hon Murray McCully, the Foreign Minister of New Zealand has visited Palestine on Thursday , June 4 and met with HE Dr Riad Malki, the Foreign minster of the State of Palestine. Mr Murray also met with HE Mr Mahmoud Abbas, the President of Palestine and HE Dr Rami Al Hamdallah, the Prime Minister.
During these important meetings, the two sides had an extensive and deep discussion on the latest developments in Israel- Palestine conflict and the current attempts to revive the frozen peace process. 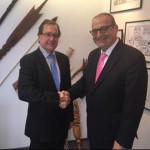 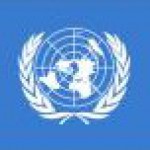 A push is currently being made in the United Nations to have the Israeli Defense Forces added to the blacklist of the council for Children and Armed Conflict.
The Special Representative of the Secretary-General for Children and Armed Conflict, Leila Zerrougui of Armenia, has recommended the IDF be included because of the 500 Palestinian children killed and 3,300 wounded during last summer’s Operation Protective Edge. 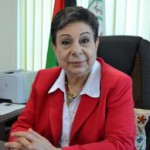 “This is a disingenuous and manipulative exercise of political and legal deception. All settlements are illegal and in flagrant contravention of international law and consensus, and any efforts to annex and to legalize the settlements blocs is a blatant attempt to steal more Palestinian land and to legitimize Israel’s ongoing system of apartheid, land theft and expansion. 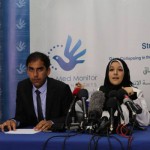 In a press release issued on May 20th, The Euro-Mediterranean Human Rights Monitor urgently calls on the international community to:
1.Bring all available pressures to bear on the Israeli government to end the blockade of Gaza.
2.Call on the Israeli government to end the targeting of innocent fishermen, farmers and other citizens, a practice in violation of the 1949 Geneva Convention.
3.Prevail upon the Egyptian government, using foreign aid as a lever, to open the Rafah crossing, without any restrictions.
4.Investigate and hold the Israeli government accountable when it is charged with war crimes and ongoing violations of human rights. No barriers should be placed that hinder the ability of Palestinians or others to seek relief from third parties such as the International Criminal Court.
5.Support the Palestinian call for a commercial seaport in Gaza that guarantees the free import and export of goods and private international travel. 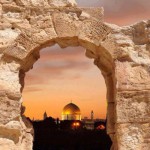 President Mahmoud Abbas' spokesman, Nabil Abu Rudeineh told Palestinian news agency Wafa on Monday that there would be no peace or stability in the Mideast unless the Palestinians can claim East Jerusalem as their capital.

He also said Netanyahu's remarks were a clear violation of UN resolutions, and the stances of the international community and the Arab League. 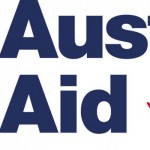 To place this in context, total Australian Official Development Assistance for its world program fell by 20% ($1 billion) with this year’s budget. 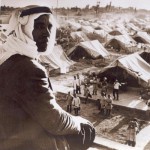 On the occasion of the 67th anniversary of the Nakba, PLO Executive Committee member Dr. Hanan Ashrawi stated:

"In 1948, Israel destroyed 531 Palestinian towns and villages and took control of an additional 774, and more than 800,000 Palestinians were forced to become refugees. 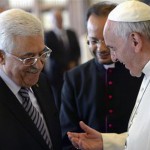 ROME—The Vatican said it would soon sign its first treaty with the “State of Palestine,” lending legal weight to a recognition it has extended for more than two years
Agreement deals with religious liberty, legal and tax status of Catholic institutions in Palestinian territories 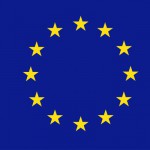 A high-profile group of former European political leaders and diplomats has called for the urgent reassessment of EU policy on the question of a Palestinian state and has insisted Israel must be held to account for its actions in the occupied territories.