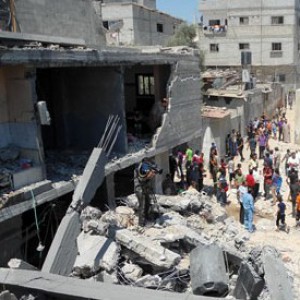 On the first day of the fighting, the military attacked the Kaware’ family home. The house collapsed. Nine people, including five children aged 7 to 14, were killed. This was just the first of dozens of air, sea and ground strikes, which would become one of the appalling hallmarks of the fighting in Gaza this summer: bombings in which hundreds of people were killed – constituting more than a quarter of all of the Palestinians killed in the fighting. Time and again Palestinian families suffered much grievous loss of life. In a single instant, so many families were ruined, with the wreckage of their lives mirroring the devastation of their homes.

These attacks were not carried out on the whim of individual soldiers, pilots or commanders in the field. They are the result of a policy formulated by government officials and the senior military command. These officials backed the policy of attacking homes, reiterating the argument that the attacks conform to international humanitarian law (IHL) and eschewing any responsibility for harm to civilians.

For the purpose of this report B’Tselem investigated 70 incidents in each of which at least three people were killed while inside their home. A total of 606 Palestinians were killed in such incidents, the vast majority of whom took no part in the fighting: more than 70% were either under 18, over 60 or women. An examination of these cases indicates that, at least in some cases, the military’s actions ran contrary to IHL provisions and, in other cases, there is grave concern that they did so. B’Tselem’s research indicated three main reasons that led to the death of so many civilians:

A. Broad definition of what constitutes a “military objective” that may be targeted

It is possible for residences of operatives of Hamas or other organizations to be considered legitimate military targets, but IHL stipulates a twofold test for deciding whether a structure is a “military objective”: the structure must make an effective contribution to military action, and harming it must give the attacking party a clear military advantage.

In spite of this, no official claimed that there was any connection between a house that was targeted and any specific military activity there. Instead, officials listed the occupants’ past and present actions against Israel, or described actions that could have boiled down to a phone call or a meeting which could take place anywhere.

The explanations the IDF Spokesperson and the MAG provided for the destruction of operatives’ homes are unconvincing and appear to be no more than a cover-up for the actual reason for the destruction, namely the identity of the occupants. In this sense, these strikes constitute dozens of cases of punitive house demolitions – themselves prohibited – carried out from the air, with occupants still inside. In the absence of specific information about the effective contribution a given house made to military action and the clear advantage gained by destroying it, the fact that a Hamas or Islamic Jihad military branch operative lived in it, is insufficient grounds to make the house a legitimate military target.

B. Flexible interpretation of the concept of lawful “collateral damage”

The parties to the hostilities must also adhere to the “principle of proportionality”, whereby when harm to civilians as a result of an attack is projected to be excessive in relation to its anticipated military advantage, the attack should not be carried out. Obviously, this principle is relevant only in cases of legitimate military targets. Otherwise, the attack is unlawful a priori, regardless of the expected “collateral damage”.

The proportionality of an attack is measured by the projected harm it would cause to civilians and the military advantage it would give, rather than by the damage caused in actual fact. Accordingly, the answer to the question of whether the military complied with the principle of proportionality depends on the information it had when launching the attack.

Yet many civilians who took no part in the fighting were killed in every strike in which houses collapsed with their occupants inside. After repeated attacks with many civilian casualties, decision makers should have anticipated the severe harm caused by these attacks. Nevertheless, such attacks persisted throughout the fighting, and the policy of firing at homes remained unaltered. Officials – military and otherwise – refrained from addressing specific cases, and instead, repeated the general argument that the military follows the principle of proportionality. However, in the absence of proof that the military advantage the anticipated from these attacks was both unmistakable and significant, the inevitable conclusion is that this principle has been violated.

To minimize harm to civilians, armed forces are required to give “effective advance warning” prior to the attack, “unless circumstances do not permit”, in order to allow civilians to protect themselves. The duty to take precautions is enshrined in IHL. It is not an act of goodwill on the part of the military toward the residents, but an express obligation the military must fulfil.

Over the course of the fighting, the military used two main warning methods. One was warning residents of a house the military was planning to attack over the phone or by firing a relatively small missile at their roof. These warnings were not always effective. Sometimes, residents were not given enough time to evacuate and sometimes it was not clear which house was the target. In other cases, the residents who had been warned did leave the house, but residents in nearby homes who had not received a warning, were hurt when their homes were damaged in the attack. In some of the cases we investigated, occupants told B’Tselem that they had received no warning prior to the attack, and therefore did not leave. B’Tselem has no way of knowing whether the military had given these residents a warning that they did not understand or had given no warning at all.

The other warning method was distributing flyers that issued a demand that residents evacuate vast areas. Tens of thousands of residents did leave their homes following such warnings. However, in some cases investigated by B’Tselem, members of families who had fled their homes in accordance with the military’s warnings, fleeing to neighborhoods considered safer, ended up perishing in an attack.

Officials eschewed responsibility for the immense harm to civilians, placing the blame squarely on the shoulders of Hamas. Prime Minister Binyamin Netanyahu said that Israel’s “security forces are doing everything in their power to avoid harming civilians and if innocents are hurt, it is because Hamas deliberately hides behind Palestinian civilians”.

This argument is unacceptable. True, Hamas and other organizations operating in the Gaza Strip do not abide by IHL, nor do they purport to do so. As B’Tselem stated both during and after the fighting, Hamas has breached these provisions, and particularly its duty to distinguish between civilian objects and military targets. Not only did Hamas fire at Israeli civilians and civilian targets, it did so from within the civilian population. Hamas operatives fired from sites located near civilian dwellings, concealed weapons and munitions inside them and dug tunnels under them.

Given this reality, the issue at hand is what conclusions policymakers may draw from it. The prime minister’s statements indicate he believes that Hamas and the military share the responsibility to take precautions. Yet this interpretation is designed to block, a priori, any allegations that Israel breached IHL provisions. Accepting it would mean that there are no restrictions whatsoever on Israeli action and that whatever method it chooses to respond to Hamas operations is legitimate, no matter how horrifying the consequences. This interpretation is unreasonable, unlawful, and renders meaningless the principle that IHL violations committed by one party do not release the other party from its obligations toward the civilian population and civilian objects.

Fighting Hamas is, in fact, extremely challenging: How can military targets be distinguished from civilian objects in these circumstances? How is it possible to avoid harming civilians who are not taking part in the fighting, when Hamas operatives fire at Israel from within populated areas? B’Tselem does not purport to offer the Israeli government or the military any operative plans for conducting armed conflict in Gaza: that is not the role of a human rights organization. The government is responsible for responding to these challenges in ways that maintain humanity and uphold the law.

It is clear that the policy described in this report is not a legitimate response to this challenge. Even if political and military leaders thought this policy would bring an end to attacks on Israeli communities, they should not have implemented it because of its foreseeable, horrifying consequences as well as because of the black flag of illegality flying over it.