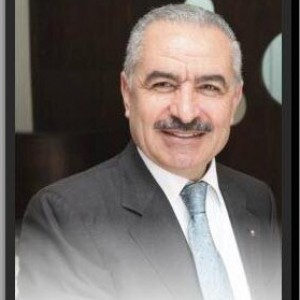 Dr. Muhammad Shtayyeh: Obama, Ask Netanyahu Straight Out: Do You Believe in the Two-state Solution?

Please find below a link to the latest Op-Ed by Dr. Muhammad Shtayyeh, Central Committee Member of Fatah and head of PECDAR, entitled “Obama, Ask Netanyahu Straight Out: Do You Believe in the Two-state Solution?” published in Haaretz on November 8th, 2015.

Obama, Ask Netanyahu Straight Out: Do You Believe in the Two-state Solution?

Honoring the Palestinian people’s rights, as per international law, would undoubtedly be the main stabilizing factor for the region.

U.S. President Barack Obama is due to meet Prime Minister Benjamin Netanyahu on Monday at the White House. The meeting comes as Obama closes his seventh year in office. Many things have happened since his historic Cairo speech where Obama announced a “new beginning” in relations between the United States and the Arab world. In his speech, Obama stated: "The situation for the Palestinian people is intolerable. And America will not turn our backs on the legitimate Palestinian aspiration for dignity, opportunity and a state of their own."

These words resonated deeply with our people, creating the conditions whereby the spirit of “yes we can” that brought Obama to office became the talk of the Palestinian people. This hope soon turned into despair and the optimism of Obama’s first years in office slowly but steadily faded.

Undoubtedly Obama has achieved important milestones in his foreign policy. He opened up to Cuba and started the process of normalizing relations after decades of boycotts and blockades. He also reached an agreement with Iran on its nuclear program, a historic agreement providing for the possibility of future cooperation between various contentious players in the Middle East.

In both these cases, Obama was determined and did not waver when faced with powerful lobbies and voices supporting the strangulation of the Cuban people and those calling for yet another war in the Middle East. Nevertheless, U.S. policy vis-à-vis Palestine over the past seven years hasn’t achieved a just and lasting peace, despite the intensive and well-intentioned efforts of Secretary of State John Kerry.

But Obama still has 15 months to show the Arab world that the initial empathy shown for the injustices suffered by the Palestinian people could be translated into effective policy to end decades of foreign occupation, injustice and humiliation. To do that, and after the seven years that have passed, I believe Obama should ask direct and clear-cut questions to Netanyahu during his visit.

First, Obama should ask a basic question: Mr. Prime Minister, do you support the two-state solution or do you want to continue controlling the lives of millions of Palestinians? In Netanyahu’s mind Palestinians can live under the effective control of Israel while remaining noncitizens – meaning they will remain in their small and confined areas of autonomy with unequal access to water and no effective control or sovereignty. And they will be living under one state with two systems; in other words, an apartheid regime.

Second, Obama should ask Netanyahu if he is willing to implement the previously signed agreements including the full cessation of illegal settler-colony expansion, the release of Palestinian prisoners as per agreements, the reopening of Palestinian institutions in East Jerusalem, and the dismantling of the Israeli army’s so-called Civil Administration.

Third, Obama should ask if Israel is finally willing to define its borders and put a map on the negotiating table.

Obama will soon realize there can be no serious talk about two sovereign states living side by side in peace and security with Netanyahu. The prime minister simply does not believe in the importance of historical reconciliation between both peoples; on the contrary, Netanyahu has worked all his life to negate Palestinian rights and undermine the peace process.

The United States should make up its mind. It could either continue the current path of granting Israel legal and diplomatic impunity regardless of its continuous crimes and violations, or it could take bold steps like supporting UN Security Council resolutions on illegal Israeli settlements, ending the occupation and fully recognizing the State of Palestine based on the 1967 border, joining the 137 nations that have recognized Palestine.

At the same time, we need a paradigm shift, since the old formulas clearly have not worked. The United States should work with more international partners to implement a new multilateral setting for Middle East peace. If there was a Geneva Conference for Iran, with the successful 5+1 formula (the permanent members of the UN Security Council and Germany), why shouldn’t there be an international conference for Palestine, including the Quartet, Arab countries and other international players?

The Palestinian people, including our refugees in countries such as Syria and Lebanon, need answers to their demands. They are not part of the problem but a mandatory part of any solution. Honoring their rights, as per international law, would undoubtedly be the main stabilizing factor for the region. The promises made in the Cairo speech to the Arab and Muslim world haven’t been implemented, and the hope has been turned into despair, especially in the streets of Jerusalem.

But Obama still has 15 months to put things on track. After his meeting with Netanyahu he should be able to move ahead with more clarity and determination toward the establishment of a sovereign Palestinian state, an aim that has been defined as an American “national security interest.”

President Obama, “yes you can” carry out your promise to bring justice, peace and security to the Holy Land and defeat the cycle of violence and extremism in the region. That would be your legacy for generations to come.

Dr. Muhammad Shtayyeh is a member of the Fatah Central Committee and minister in charge of the Palestinian Economic Council for Development and Reconstruction (PECDAR).