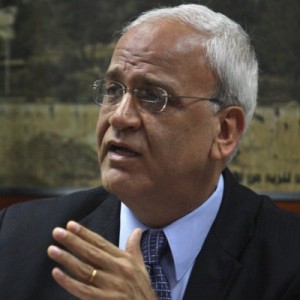 Please find below a link to the latest Op-Ed by Dr. Saeb Erekat, Secretary General of the Palestine Liberation Organization, entitled “The Palestinian People Ask: Where is Israel’s F.W. de Klerk”, published in Wall Street Journal, on November 7th, 2015*.

*This is an exclusive Op Ed for Wall Street Journal. WSJ has exclusive rights over this Op Ed for the next 30 days.

The Palestinian People Ask: Where Is Israel’s F.W. de Klerk?

If a two-state solution fades away, Israel will consolidate apartheid across all of Palestine.

The only way to stop the deteriorating situation in Israel and occupied Palestine is to address the root causes. Israeli leaders, however, stubbornly reject this approach, instead choosing to blame, attack and incite against the people they oppress for refusing to submit to inhumane discriminatory treatment decade after decade.

Years of systematic violation of Palestinian rights, allowed by an unprecedented culture of impunity, have led to a situation whereby an unarmed, and very young, generation is willing to confront the region’s strongest military.

This young Palestinian generation, the Oslo generation, was promised freedom when the agreement was signed on the White House lawn 22 years ago. This generation was raised with the hope that the brutal Israeli occupation would soon come to an end. But it did not. The Palestinian people continue to endure humiliation; they cannot travel freely, their studies and work are impeded by checkpoints, and they cannot even marry across the Green Line without severe restrictions on where they may live. At every turn, Israel continues to demand our submission to its occupation, oppression and apartheid policies.

With U.S. involvement, the peace process was shaped—we thought—as a peaceful tool to take Palestinians from occupation to independence. Nevertheless, more than two decades after signing the Oslo Agreement, Palestinians today have seen the number of settlers living illegally in Palestine triple, Gaza has become an open-air prison, and East Jerusalem is besieged and off-limits to most Palestinians.

Despite 48 years of international statements on the illegality of Israel’s colonialist enterprise in occupied Palestine, no meaningful action has been taken to stop Israel. On the contrary, consecutive Israeli governments have continued violating international law with full impunity, while international trade with Israel continues to grow, including with Israeli settlements.

Today, the most extremist right-wing government in its history governs Israel. Israeli Prime Minister Benjamin Netanyahu’s party retained its hold on power in a March election, after a campaign in which he said if he were elected there would be no Palestinian State and that “Arab voters are heading to the polling stations in droves,” referring in racist terms to his own Palestinian citizens. In 2013, Naftali Bennett, an Israeli army veteran and Mr. Netanyahu’s minister of education, said: “I’ve killed lots of Arabs in my life, and there’s no problem with that.” Deputy Foreign Minister Tzipi Hotovely has repeatedly said she opposes a Palestinian state and that occupation will continue.

Recently the Israeli prime minister even went so far as to claim that the Nazi Holocaust was inspired by a Palestinian leader. Mr. Netanyahu last week retracted the outrageous accusation, but his original statement showed us the mind of someone who aspires to delegitimize the Palestinians and to deny their aspirations to live in freedom and dignity. He and several of his cabinet members have a history of using dangerous words that incite violence against Palestinians. In July Israeli terrorists set a Palestinian home on fire in the Duma village; the Dawabsheh family—18-month-old Ali, his father, Sa’ad, and mother, Riham—were burned alive. Only 4-year-old Ahmad survived.

In his Sept. 30 speech to the United Nations General Assembly, Palestinian President Mahmoud Abbas warned of the dangers of the current status quo. He also denounced Israel’s violation of commitments made in signed agreements and international law. President Abbas said he would back away from the Oslo deal if Israel continues to violate it. He did not back away from his commitment to achieve peace, to which he has devoted much of his life.

Painfully, the Palestinian Oslo generation has reached its limit, disgusted with a peace process that did not lead to freedom, but to an apartheid reality accepted by too much of the world.

As I watch this play out before me, and prepare to hand the reins of leadership to my children’s generation, I cannot help but wonder whether the Israeli people are capable of electing a leadership committed to a just peace. Where is their F.W. de Klerk? Israel seems prepared only to let the opportunity for a two-state peace slip away.

If the possibility of a two-state solution does fade away—as is already happening courtesy of Mr. Netanyahu—Israel will consolidate apartheid across all of Palestine, pushing the achievement of Palestinian freedom, independence and equal rights beyond the horizon.

Mr. Erekat is the secretary-general of the Palestine Liberation Organization.