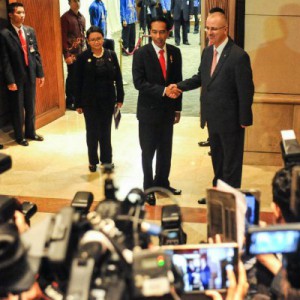 Speaking to the press conference after the meeting, President Widodo said that further meetings to discuss concrete moves to push forward the independence of Palestine would be conducted at the Asian African Summit 2015.

"Palestine is the only country which is being colonialized. Occupation in Palestine must be ended. Indonesia has demonstrated full support for independent Palestine through processes in the UN, "Widodo said after his meeting with Hamdallah.

To facilitate concrete supports towards independence of Palestine, Widodo asked Hamdallah to open an Indonesian honorary counsel office in Palestine.

"The prime minister said in the meeting that he would fully support Indonesia's idea as it would ease Indonesia's efforts in materializing its concrete moves to support independent Palestine, " Widodo said.

Palestine declared its independence in November 1988, claiming Gaza Strip and West Bank as its territory.