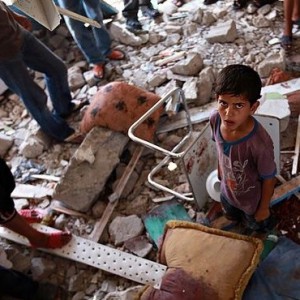 Ban Ki-moon condemns attacks, including strike on UN school that killed 20 people and wounded dozens, ‘as a matter of the utmost gravity’
Israel was responsible for striking seven United Nations sites used as civilian shelters during the 2014 Gaza war in which 44 Palestinians died and 227 others were injured, an inquiry ordered by UN secretary general Ban Ki-moon has concluded.
Releasing the report on Monday, Ban condemned the attacks “as a matter of the utmost gravity” and said “those who looked to them for protection and who sought and were granted shelter there had their hopes and trust denied”.
Ban insisted that UN locations were “inviolable”.
The issue is particularly sensitive as the locations of all UN buildings – including schools used as shelters – are routinely provided to the Israeli military and updated in times of conflict.
Ban’s criticism was contained in the published summary letter of a confidential internal report, commissioned by the secretary general in November, running to 207 pages.
In his letter Ban also hit out at Palestinian militant groups for putting some UN schools in Gaza at risk by hiding weapons in three locations that were not being used as shelters.
“I am dismayed that Palestinian militant groups would put United Nations schools at risk by using them to hide their arms.”
He added, however, that: “The three schools at which weaponry was found were empty at the time and were not being used as shelters.”
Israeli diplomats had exerted pressure on the UN to delay publication of the report until the completion of Israel’s own investigations into the attacks – conducted by the Israeli military advocate general Danny Efroni. Israel’s military in September opened five criminal investigations into its Gaza war operations, including attacks on some of the UN schools and an incident that killed four Palestinian children on a beach.
The UN inquiry, which examined both forensic evidence and testimonies of UN staff in Gaza during the 50-day war last summer, concluded seven incidents were attributable to the Israel Defence Forces.
Ban added: “I will work with all concerned and spare no effort to ensure that such incidents will never be repeated.”
Although the report has no legal status, the disclosure of the inquiry’s findings comes at a difficult time for Israel on the international stage, facing increasing international isolation over its policies and following the acceptance of the Palestinian Authority as a signatory to the International Criminal Court earlier this month.

The attacks on UN schools being used as shelters were among some of the most controversial incidents of the war. International humanitarian law – while complex – requires attacking forces in areas where there are non-combatants to protect civilians and adhere to the principle of proportionality, safeguards even more stringent when civilians are under UN protection.
In one of the most serious incidents, the UNRWA school in Jabaliya was struck by Israeli fire, killing 20 people and wounding dozens.
In the aftermath of the attack Israel claimed – including in a report into the incident – that soldiers near the school were had come under fire.
In another incident that saw Israeli munitions strike a UN school in Beit Hanoun 15 Palestinians were killed in the playground as they awaited evacuation while dozens more injured.
Israeli sources had originally tried to suggest that the attack had been due to a Hamas weapon falling short.
The UN inquiry – separate form an inquiry launched by the UN Human Rights Council – was headed by retired general Patrick Cammaert, a former officer in the Dutch military and included military and legal experts.
More than 2,100 Palestinians, most of them civilians, were killed during the Gaza conflict last July and August. Sixty-seven Israeli soldiers and six civilians in Israel were killed by rockets and attacks by Hamas and other militant groups.
The details of the contents of the board of inquiry are confidential and only Ban’s covering letter has been made public. Conceding that the report was of “considerable interest” he said he had taken the decision to release a summary of the inquiry’s findings.
The report was compiled from analysis of weapons, medical reports, photographs and video footage, and submissions and testimonies both by UN staff and other organisations.
Ban thanked Israel for its cooperation in preparing the report and allowing investigators to access Gaza.
Ban wrote: “I deplore the fact that at least 44 Palestinians were killed as a result of Israeli actions and at least 227 injured at United Nations premises being used as emergency shelters. United Nations premises are inviolable and should be places of safety, particularly in a situations of armed conflict.”
He added: “I note this is the second time during my tenure as secretary general that I have been obliged to establish a board of inquiry into incidents involving United Nations premises and personnel in Gaza that have occurred during the course of tragic conflicts in the Gaza Strip.
“Once again I must stress my profound and continuing concern for the civilian population of the Gaza Strip and Israel, and their right to live in peace and security, free from the threat of violence and terrorism.”
When Ban visited Gaza in October, he said the destruction was “beyond description” and “much more serious” than what he witnessed in the Palestinian territory in 2009 in the aftermath of a previous Israel-Hamas war.
Ban said on Monday he has established a group of senior managers to look into the inquiry’s recommendation. A number of questions remain unaddressed in the summary of the report, not least the issue of what communications there were between UN staff and the Israeli military in particular ahead of the attack on the school in Beit Hanoun when UN staff are understood to have communicated to Israeli forces their intention to bus out civilians who were waiting for evacuation at the time of the attack.
Also unaddressed is why Israeli forces fired on designated protected locations outside of the principle of immediate self-defence when they were aware of concentrations of civilians sheltering there.
Chris Gunness, spokesman for UNRWA, which runs Gaza’s UN schools said: “The inquiry found that despite numerous notifications to the Israeli army of the precise GPS coordinates of the schools and numerous notifications about the presence of displaced people, in all seven cases investigated by the Board of Inquiry when our schools were hit directly or in the immediate vicinity, the hit was attributable to the IDF.
“The board confirms the use by the IDF of weaponry such as 120 mm high explosive anti-tank projectiles and 155 MM high explosive projectiles on or in the surrounding area of UNRWA schools where civilians had taken refuge. In the incidents investigated at least 44 people were killed and 227 injured including women and children. In none of the schools which were hit directly or in the immediate vicinity, were weapons discovered or fired from. If it were confirmed that militants did fire rockets from our schools we would condemn it, just as we robustly we condemned other violations of our neutrality.”
“The findings of the secretary general’s inquiry are fully consistent with the statements made by UNRWA that we did not hand any weapons over to Hamas. The Board of Inquiry has not found any evidence that we did. The Board of Inquiry found that upon the first discovery UNRWA senior management notified local authorities in Gaza about the weapons and asked for their removal. Within days of the first unprecedented discovery, the UN had established a mechanism for dealing with the weaponry and by the time of the third discovery, international experts were on hand.”