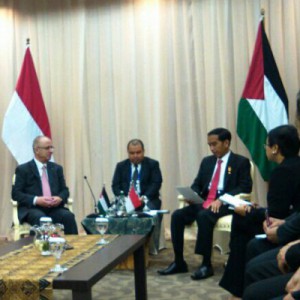 President Joko “Jokowi” Widodo, who chose Palestinian issues as one of his major foreign policy platforms in last year’s presidential election campaign, has taken his first concrete step in support of Palestinian independence with a decision to open an Indonesian representative office in Ramallah.

The President explained his decision in a meeting with Palestinian Prime Minister Rami Hamdallah on Tuesday. The government will start by opening an honorary consulate in Ramallah, the de facto capital of the Palestinian National Authority, said the President.

“The prime minister has said that he supports the idea. The establishment of an honorary consulate would make it easier for us to make our next steps [to support Palestine],” said the President after receiving the Palestinian leader.Jokowi also said that Indonesia would strongly support Palestine’s bid to acquire full UN membership as an independent state.

He also said the Indonesian government was ready to improve its trade and bilateral relations with Palestine, and that Indonesia under his leadership would provide concrete support for the Palestinians in realizing their dream to have their own state. “Palestine is the only nation [in the world] that is still colonized and occupied.

I stated during the meeting that this was the time to end this colonialism,” Jokowi told reporters after concluding the 30-minute closed-door meeting.Taking place at the Jakarta Convention Center, the meeting was one of a series of bilateral meetings scheduled on the sidelines of the 60th anniversary of the Asian-African Conference, which is being held in Jakarta and Bandung, West Java, from Sunday to Friday.

Delegations from over 70 participating countries have been preparing three draft documents expected to be signed at the conclusion of the six-day event, one of which is a declaration of support for the formation of a Palestinian state. During the meeting, Jokowi was accompanied by several ministers, including Foreign Minister Retno LP Marsudi and Culture and Elementary and Secondary Education Minister Anies Baswedan, as well as State Secretary Pratikno.

Prime Minister Hamdallah, meanwhile, brought along officials including Foreign Minister Riad Malki and Palestinian Ambassador to Indonesia Fariz Mehdawi. Speaking at a press conference, PM Hamdallah said his meeting with President Jokowi had also touched on possible economic cooperation between the two states. “I talked to the President this morning about exporting goods to Indonesia and getting exemption for these products from taxes, because in Palestine we have a difficult situation. We need to export to all countries, in particular to Indonesia,” he said.

Indonesia’s trade activity with Palestine is currently very low. Last year, Indonesia’s exports to Palestine outpaced its imports, with US$918,400 worth of exports and $110,200 of imports.Hamdallah praised the Indonesian government’s plan to open an honorary consulate in Ramallah, since it would encourage other nations to do the same.“I hope other countries will follow suit. We believe it’s time that all countries recognize Palestine,” he said.

Palestinians greatly needed concrete action from countries that had pledged to help them end the occupation by Israel and become an independent nation, he said.“We’re not talking about moral support only. We need concrete action. We need these countries to open embassies and consulates in Palestine to exchange agreements, joint agreements and commerce agreements. We need that material support. It is very important,” Hamdallah insisted.