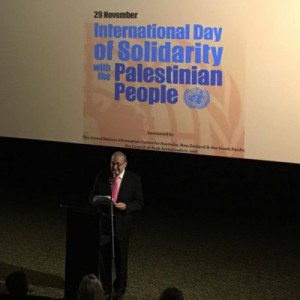 To mark International Day of Solidarity with the Palestinian People the General Delegation of Palestine to Australia, New Zealand and the Pacific organized in collaboration with UNIC Canberra and the Council of Arab Ambassadors an event at Palace Electric Cinema in Canberra.

The official proceedings were opened by The UN Secretary-General’s message for the Day read out by Mr. Christopher Woodthorpe Director of UNIC Canberra, followed by Guest of honor and Palestinian Film maker and Director of Open Bethlehem Ms Leila Sansour, and then H.E Mr Mohamed Mael-Ainin, Ambassador of Morocco, Dean of the Council of Arab Ambassadors, and then the Ambassador of the State of Palestine H.E. Ambassador Izzat Abdulhadi.
The ceremony included the screening of the film “Idol”.

Excellencies, Distinguished Guests, Ladies and Gentlemen,
Thank you for being here this evening,
to celebrate the UN Day of Solidarity with Palestinian people.

Thank You Chris
and Thank You Excellencies

The General Assembly recently voted on a series of draft resolutions regarding Palestine and covering assistance to refugees, UNRWA,
the full applicability of the Fourth Geneva Convention,
and the condemnation of Israeli settlements
as illegal under international law.

These last two resolutions are critical to recognition
by all of the international community, that Palestine is occupied.

It has been occupied by Israel for 48 years,
and the international community must work
to create a full and a just resolution
based in the equity provided by international law.

Our strategy is non-violence and to work multilaterally
within international frameworks, to achieve justice,
our freedom and full sovereignty. And this strategy is working.

In 2012, Palestine was upgraded to non-member observer state
in the United Nations,
and 138 countries now recognise Palestine as a state,
with the rights and the responsibilities accorded to states.

As we exercise our rights in the international arena
Israel’s response is to use increasingly repressive and tyrannical measures to try to deny our personhood,

the exercise of our rights, and Palestinian statehood.

Tired of harassment and discrimination,
living with the threat of arbitrary imprisonment and home demolition, tired of poverty, a lack of opportunities,
and systematic violence by soldiers and settlers,
it’s hardly surprising that some young Palestinians are despairing.

The current stone-throwings and stabbings
are the actions of people who feel their human dignity is stripped away
and their hope for a better future stolen.

We will not allow Israel to drag us into their cycle of violence
and towards their end:
The excuse of security for creating fear and maintaining the occupation.

We will not allow Israel’s reliance on brutality,
to undermine our strategy of peaceful justice.

Israel, like Palestine, committed to the two-state solution.
But Israel’s own actions are throwing its own future into doubt.
Our land is ours and we will not go away.

We’re asking the world to implement justice
according to international law, and Israel will have to choose its future. And while work and wait,
we’re continuing to do what we’ve done since 1993 – build our state.

I’d like to thank you – the international community,
Australian civil society and the Australian public,
for your stronger and stronger support for Palestine.

More than 66% of Australians now support recognition
of Palestine as a state.

We’re seeing increased visits by MPs to Palestine,
and this year saw a Labor Party resolution regarding Palestine.

Last month, the General Director of the Ministry of Agriculture
was here in Canberra to review agricultural agreements with Palestine, and sign new agreements.

Next week, we’ll have the UNWRA Commissioner.

Despite big falls in aid funding to many parts of the world,
funding to Palestine continues.

We’d all like to see faster political change in the Australian government, however things are changing.

This week I received a letter from the Minister for Foreign Affairs,
the Honourable Julie Bishop.
I’d written to her about Israel’s actions in relationship to Haram al Sharif and Israel’s increasing violence against Palestinians.

Her response included this sentence and I quote:
The Australian government remains committed to a future where Israel and a Palestinian state exist side-by-side in peace and security
within internationally recognised borders.

So, Australia’s vision of the future, is of a Palestinian state.
Not bad.

138 countries recognise Palestine and now we’re just waiting
for Australia to catch up.
We’re patient people and we’re getting there.

Ladies and gentlemen, the conflict we’re in,
is a struggle between power and justice;
honesty and dishonesty, oppression and freedom.

It’s a David and Goliath story, Dawood and Jalut:
The powerful giant versus the boy whose position was clear,
and whose actions were integrity itself.

Tonight’s movie is about one Palestinian,
but it could be about all Palestinians.

Like David, Mohammed Assaf took on the world.
In his case it was the music world – and he won.
He did it through determination, hard work, adaptability,
and the integrity of being the best.

It’s a story about human resilience and the ability to look forward
and work hopefully, when it could appear there’s little hope.

Ladies and Gentlemen, we’re working to create freedom and peace and we’re working with determination, adaptability,
and the integrity that truth provides.

We ask you to do the same.
We ask your states, your organisations, and your networks
to actively stand with us; and side-by-side,
to work to see a fully independent, sovereign,
secure and democratic Palestinian state, able to protect all of its people.

At times, we can feel like David;
Struggling against what can feel like overwhelming odds.
But just like David, we will win,
and the world will be a more peaceful place because of it.
Ladies and Gentlemen, after all of your work, enjoy yourselves tonight.