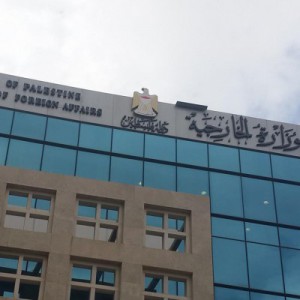 JERUSALEM, November 9, 2015 (WAFA) – Ministry of Foreign Affairs condemned in a statement released on Monday the Israeli government’s approval of the construction of 2,200 new housing units in two West Bank settlements, as well as a plan to organize two settlement outposts.

It said the Israeli decision undermines any chance of a two-state solution and attempts to revive peace talks.

This came after Israel's planning committee for construction in the West Bank approved the construction of about 2,200 new housing units in Ma’aleh Michmash settlement complex, east of Ramallah, and a plan to erect two settlement outposts in the area.

The Israeli daily Haaretz said the move was to preempt legal action by Palestinians and rights groups to evacuate the sites.

The plan includes the settlements of Ma’aleh Michmash, Rimonim, Kochav Hashahar, Tel Zion and Psagot, and the area south of the settlement of Ofra, Haaretz said.

Originally submitted in 2014, the plan was approved last month by Israeli so-called Defense Minister Moshe Ya’alon who gave the green light for the council to discuss it.

According to Haaretz, the approval was granted in anticipation of a High Court of Justice hearing scheduled for Wednesday on a petition by the Yesh Din organization and Palestinians from the area who aim to evacuate the Mitzpeh Danny outpost, which the plan seeks to recognize.

Under the plan, by 2030 there will be 800 homes in Ma’aleh Michmash, which serves as the central land reserve in the region, while 300 more homes will be added to Kochav Hashahar.

The plan also seeks to regularize the Mitzpeh Danny and Neveh Erez outposts, in addition to tourism sites and an education complex.

To be noted, settlement activities in the occupied Palestinian Territory and the Golan Heights, both occupied since 1967, are considered illegal in international law.

B’Tselem, the Israeli human rights group said, “The settlements have been allocated vast areas, far exceeding their built-up sections. These areas have been declared closed military zones by military orders and are off limits to Palestinians, except by special permit. In contrast, Israeli citizens, Jews from anywhere in the world and tourists may all freely enter these areas.”