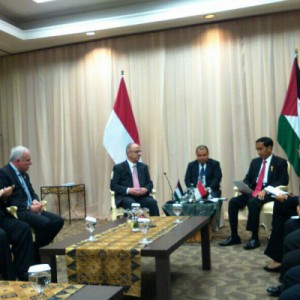 Palestine urged Asian and African countries on Monday to translate their support for the Palestinian struggle into concrete actions that would help accelerate the establishment of a sovereign Palestinian state.

Speaking to reporters on the sidelines of the Asian-African Ministerial Meeting on Monday, Palestinian Foreign Minister Riad Malki said Palestians were encouraged that so many Asian and African countries supported Palestinian independence.

However, he said he was eager to see how those words of solidarity were put into action to help end the Israeli occupation of Palestinian territories.

“We need to work together to end this occupation. Occupation is the worst form of terrorism,” he said.

Held on the second day of the commemoration of the 60th anniversary of the Asian-African Conference, foreign ministers from over 70 participating countries discussed three draft documents expected to be signed at the conclusion of the event, one of which was a declaration of support for the formation of a Palestinian state.

Despite strong opposition from Israel and the US, in 2012 the UN granted Palestine non-member observer state status.

Last year, the UN Security Council, however, rejected a draft resolution calling for the withdrawal of all Israeli forces from the West Bank and East Jerusalem, lands that were seized in the 1967 Arab-Israeli war, by 2017.

Only eight of 15 members of the UN’s most powerful body, including Jordan, China and France, voted for the resolution.

Meanwhile, the US and Australia voted against the resolution, while abstainers included the UK, Lithuania, Nigeria, South Korea and Rwanda. The veto by the US, a permanent member of the council, effectively killed the resolution.

Malki singled out Nigeria’s sudden withdrawal as another reason behind the failed campaign.

“We tried in the Security Council. We failed because another state convinced one country present here [in the conference], Nigeria, to change their vote,” he said.

Renewed commitments of support from Asian and African countries, according to Malki, would help Palestine take the next step to help it acquire full independence.

“We also should go back to the Security Council and try what we tried back in 2011 — asking for full membership for Palestine. Not just as an observer state, but a full member state. I think we deserve that.”

In her opening remarks during the foreign ministerial meeting on Monday, Foreign Minister Retno LP Marsudi said Indonesia regarded Palestinian independence as an issue deserving of the country’s unwavering support and attention.

“Indonesia remains steadfast in its support for an independent Palestine within the context of a two-state solution. In this context, Indonesia strongly believes that ensuring the readiness of the Palestinian people’s capacity to govern as an independent state is as important as achieving independence itself,” she said.

President Joko “Jokowi” Widodo has made Palestinian independence a key part of his foreign policy agenda.