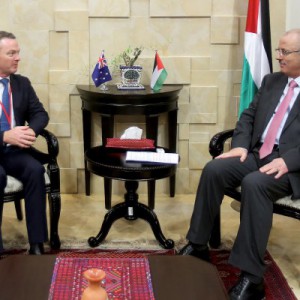 The Prime Minister confirmed that Israel continued policies of daily violations against Pales...tinian civilians, including; murder, arbitrary arrest, house demolitions and forced displacement, land confiscation, and in addition to the continuation of settlements construction and expansion, jeopardizes the two-state solution and undermines the chances for peace.

The Prime Minister also briefed the guest on the Israeli obstacles to economic growth, especially Israel's continued control over 64% of West Bank land (area "C"), depriving Palestinians from exploiting and taking advantage of their natural resources that are mainly found in this area.

At the end of the meeting the Prime Minister thanked Australia for its continued support to Palestine main development sectors as; education, industry and water.