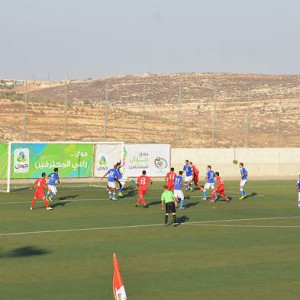 At 8pm next Tuesday evening, 14 April, the ABC’s Foreign Correspondent program will feature Pitch Battle, a documentary about the Palestinian team that visited Australia this year to compete in the Asian Cup.
Pitch Battle follows Abdelhamid Abu Habib, an exile from Gaza who lives on the West Bank and hasn’t been home in three years, and the team’s assistant coach, Saeb Jundiyeh, who lost the top two floors of his house in the Gaza war. Team boss is Jibril Rajoub, a former security aide to Yasser Arafat who spent more than 15 years inside Israeli prisons.
For Australian producer Dan Goldberg, making the film has been a rewarding but at times very confronting journey.
“As a journalist, a Jew and as someone who has lived in Israel, it was remarkable to get the access to the Palestinian team. Even more remarkable was living for one week behind what the Palestinians brand the ‘apartheid wall’. To stand at the checkpoint between Ramallah and Jerusalem and film kids throwing stones and firing Molotov cocktails at the Israeli watchtower, and then hear bullets and feel the sting of tear gas in my eyes, was confronting and conflicting to say the least.” - Dan Goldberg, filmmaker.