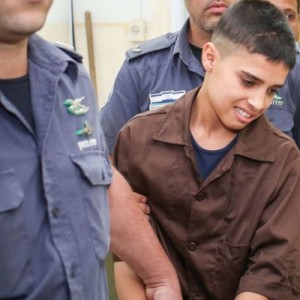 BETHLEHEM (Ma'an) -- In video footage obtained by Ma'an, Israeli officials have been captured on film hurling abuse at a 13-year-old Palestinian child accused of stabbing two Israelis in East Jerusalem last month during the child's interrogation.

The footage shows segments of the interrogation of Ahmad Manasra, 13, as Israeli detectives yell curses and verbally abuse the child, while questioning him about the incident and his motives. It is not known when the footage was recorded. Israel's Jerusalem District Court indicted 13-year-old Manasra on charges of attempted murder on Oct. 30 following an attack on two Israelis on Oct. 12.The stabbing attack took place near the illegal Israeli settlement of Pisgat Zeev in occupied East Jerusalem, and reportedly left two Israelis, aged 13 and 21, seriously injured.In the video, one interrogator repeatedly shouts at Manasra in Arabic to "shut up", while Manansra continuously pleads for the officer to believe that he cannot remember anything about the incident.The officer is then seen questioning the boy about a phone call with his lawyer, and tells him that he is accused of the attempted murder of "two Jews," and that Manasra had supported "the enemy in time of war," which Manasra does not seem to understand. The interrogator is next recorded showing Manasra a video of the attack, shouting questions at him about details of the incident. Manasra starts to cry as he says that he "doesn't know" and "cannot remember," pleading with the officer to "take me to the doctor to check me," all while hitting himself on the head. Manasra continues to say that "he cannot remember anything," begging the detective to believe him, and adds that he "woke up the next day not knowing what had happened to me."The detective continuously calls Manasra a "liar."Another interrogator joins the first, as he continues to ask him about his motives, Mansara finally says "everything you're saying is correct, I cannot remember. From what I've seen on the camera (of the original incident) it's 100 percent correct, but I cannot remember anything." The two interrogators are seen smiling as they discuss details of whether he was holding the knife up or down. Manasra tells the investigator "you've been asking me about it all along and you don't know if the knife was held up or not." The second interrogator starts shouting at Manasra and asking him about his motives. Manasra starts to cry saying that he has "forgotten," again begging the men to "take me to a doctor to see if I remember."During the attack, Ahmad's 15-year-old cousin, Hassan, was shot dead at the scene by Israeli forces, while Ahmad was knocked over by a car and seriously wounded.A video of Ahmad lying injured and bloody on the ground after being hit by the car was uploaded to social media and went viral. In the footage, an Israeli onlooker can clearly be heard saying: "Die, son of a wh***! Die!" while another tells the police officer to shoot him.Ahmad will reportedly be held in a closed facility until prosecution, with the court rejecting the family's request that he be placed under house arrest.Last month, Israeli news site Ynet said that the cousins committed the attack after returning from school and discussing the Al-Aqsa Mosque and Gaza, before deciding to be "martyrs."Due to his age, Ahmad cannot face jail time until he turns 14 in January.At least 77 Palestinians have been killed since the start of October, as rights group call for Israel to halt "unlawful" killings of Palestinians who have not posed a great enough threat at the time of their death for the deliberate use of force to be permissible by Israeli forces.At least 13 Palestinian children have been killed by Israeli forces in the unrest.