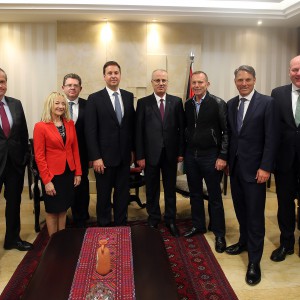 Prime Minister Hamdallah welcomed the Australian delegation to his office in Ramallah, where he discussed with them the latest political and economic developments in Palestine. In Particular, the Prime Minister discussed with them the continuation of Israeli human rights violations, assassinations, and illegal settlement expansion. He informed the delegation of the more than 1000 Palestinian buildings that Israel have demolished in Area C throughout 2016, most of which were financed by donor countries such as Australia.  Also, the Prime Minister outlined the devastating economic impact of Israel heavily restricting Palestinian access to Area C, maintaining full Israeli military control of this Palestinian land.

The Prime Minister requested that the international community immediately interfere to stop Israeli human rights violations and end the occupation. He stated that “we will not accept the continuation of the status quo, which will lead to the destruction of the two-state solution and will lead eventually to one apartheid state. What we need now is a genuine partner for peace.”

The Prime Minister then renewed and confirmed the commitment of Palestine to the two-state solution, highlighting the need for Israel to immediately halt illegal settlement expansion in order to continue the peace process; which is not a precondition, as Israel claims, but a prerequisite for a genuine and sustainable peace process. Settlements are considered illegal by international law and all relevant United Nations resolutions.

The Prime Minister also expressed his gratitude to the Australian delegation for Australian support to the institution and state-building processes in Palestine. He added that Palestine hopes to further develop bilateral relations with Australia through the establishment of a joint committee.