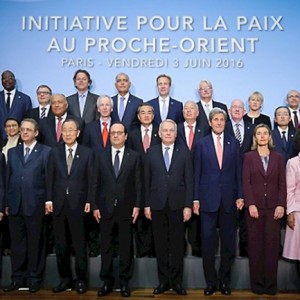 The participants met in Paris on June 3, 2016 to reaffirm their support for a just, lasting and comprehensive resolution to the Israeli-Palestinian conflict. They reaffirmed that a negotiated two-state solution is the only way to achieve an enduring peace, with two states, Israel and Palestine, living side by side in peace and security. They are alarmed that actions on the ground, in particular continued acts of violence and ongoing settlement activity, are dangerously imperiling the prospects for a two-state solution.
The participants underscored that the status quo is not sustainable, and stressed the importance of both sides demonstrating, with policies and actions, a genuine commitment to the two-state solution in order to rebuild trust and create the conditions for fully ending the Israeli occupation that began in 1967 and resolving all permanent status issues through direct negotiation’s based on resolutions and highlighting the importance of the implementation of the Arab Peace initiative.   The participants discussed possible ways in which the international community could help advance the prospects for peace, including by providing meaningful incentives to the parties to make peace. The participants also highlighted the potential for regional peace and security as envisioned by the Arab Peace initiative.
The participants highlighted the key role of the Quartet and key regional stakeholders. They welcomed the interested countries offer to contribute to this effort. They also welcomed France's offer to coordinate it, and the prospect of convening before the end of the year an international conference.