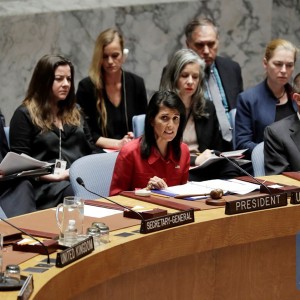 In the upcoming days, the first anniversary of UN Security Council Resolution 2334 on the Israeli settlement construction will be marked. UN resolution 2334 is considered the most important UN resolution issued during the past 30 years. The UN Secretary-General intends to submit his annual report to the Council to present the dangers of colonization and the Israeli occupation practiced during the past year in complete contradiction to the content and substance of this resolution. It is expected that the Security Council will bear its responsibilities for the occupation’s violation and disregard this resolution.

This report will be built upon the vote on the draft resolution of the Palestinian Security Council, which affirms the illegality of President Trump's recent decision to recognize Jerusalem as the capital of Israel and transfer his embassy to Jerusalem, this decision is opposed by Security Council resolutions, in particular resolutions 478 and 2334. What happened in the last session of the Security Council discussions, and the statements, events, and activities around the globe, confirms that America has completely isolated itself by this resolution, and formed an international consensus rejecting it demanding its abolition, and this is what we will portray today by voting on this draft resolution. We realize that there have been attempts by some States to change the resolution or postpone the vote on it, but we’re certain of the commitment of other States to the norms of international law and the principles of the United Nations Charter guiding the work of the Security Council.

This way, we will get 14 votes in favor of the Palestinian draft resolution. Where US representative at the United Nations, Nikki Haley, takes pride in using the "veto" against the draft resolution, we will assure her that her position, is an individual position that rejected internationally. When the United Nations General Assembly votes tomorrow on the right to self-determination of the Palestinian people through legitimate right with a vast voting majority, it will reaffirm the position of the majority of the world's Member States of the United Nations with the Palestinian right to face the Israeli occupation, which continues to violate international law. The use of the veto by Nikki Haley prompts us to call on the United Nations General Assembly for an emergency session titled "Uniting for Peace" and to ask the member states of the Assembly to vote on the same draft resolution we submitted to the Security Council, which the United States fought through the veto. In the General Assembly, the United States will not be able to use this privilege, and voting under the name of “Uniting for Peace” will have the same value and importance of UN Security Council resolutions, and this will be a serious blow to Nikki Haley and all the new Zionists who are pushing the US administration towards this international isolation, against the rights of our people.