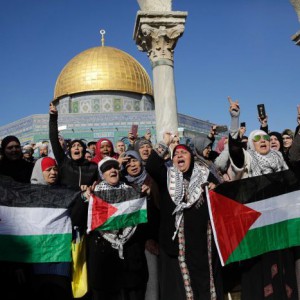 “We express our appreciation to all United Nations Security Council members who have taken a position of courage and principle and have rejected and condemned the irresponsible decision of the US Administration to unilaterally and illegally recognize Jerusalem as the capital of Israel and move its embassy there. This reinforces the global assessment that the US Administration has undermined the chances of peace, forfeited its position as an honest broker and has become complicit in Israel’s crime of illegally annexing Jerusalem.

We call on the UN Security Council to adopt a resolution to bring the U.S. to compliance and to rescind its dangerous decision that is in flagrant violation of UN resolutions and undermines the global rule of law.  Such a move presents a serious risk of further deterioration and of additional damage to the already volatile situation on the ground.

It is now imperative that the United Nations Security Council admit the state of Palestine with its capital Jerusalem to full membership to the U.N. and for individual states to recognize the state of Palestine with Jerusalem as its capital. At this critical time, the international community is called upon to decide whether it wants to stand on the side of peace, justice and international law or on the wrong side of history and legality by perpetuating an occupation that holds an entire people captive and persists in confiscating their land, their resources, their history and their freedom with full impunity.

We urge all members of the international community, including the European Union, the Arab League, the Organization of Islamic Cooperation and all other international blocs who are committed to the requirements of peace and justice to intervene immediately and to exercise the political will necessary to end this extremely precarious situation and to ensure compliance by both the Israeli occupation and its American patron.”