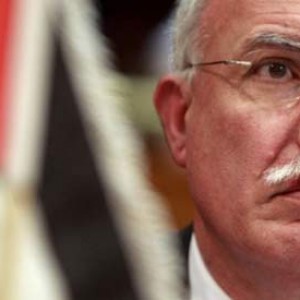 Palestinian Minister of Foreign Affairs and Expatriates his excellency Dr. Riyad al-Maliki, confirmed that the Security Council States unified vote isolated the United States in its violation to the principles of international law and decisions of the international community.

Minister Malki stated that this resolution, is an opportunity for the United States to retreat from its illegal decision and return to consistency with the United Nations Charter, international law and will, but unfortunately the US stood on the wrong side of history announcing its bias to colonialism and injustice undermining peace efforts in the Middle East and the world.

Moreover, He called on the United States to retreat its decision, and stressed that its Veto isn’t an exemption to assuming its responsibilities, which is a new violation of the principles and the charter of the United Nations and its institutions. This veto will not modify the status of Jerusalem as the occupied capital of the state of Palestine, but no doubt, changes the status of the United States as a mediator in the peace and the upcoming political process.

“The states defends their sovereignty through respecting the rules of international law, and not by granting immunity to other states who violate and commit crimes, as is the case with Israel, the occupying power," he said.

Al-Maliki stressed that the justice of the Palestinian cause, the steadfastness and the sacrifices of our leadership and people based on ethical principles and on the respect of the foundations of international law in the face of the colonial occupation, have made it a matter of international consensus, greater than the narrow interests of any government, furthermore, any prejudice practiced towards the Palestinian cause by any party undermines the credibility of this party.

The Foreign Minister also thanked the countries that voted in favor of this resolution respecting their principles towards human rights, justice, and international law, which serves the Palestinian people and their cause since Jerusalem, as he indicated, is Palestine’s heartbeat, a key and an icon of peace.

In conclusion, al-Maliki pledged to continue working towards the implementation of the Palestinian leadership's plan, declared in the President’s speech in the Islamic Summit; to protect Jerusalem and our Palestinian people, ending the occupation, and realizing the inalienable rights of Palestinians who were displaced in 1948, in accordance to Resolution 194.