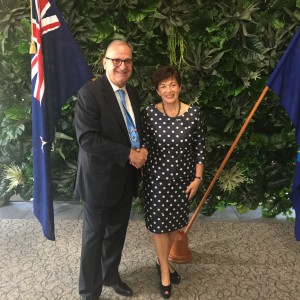 Ambassador of the State of Palestine Izzat Abdulhadi has concluded a successful visit to New Zealand where he attended the Waitangi Day Reception organized by New Zealand's Governor General.

At the reception, Ambassador Abdulhadi met briefly with the Prime Minister of New Zealand the Hon. Jacinda Ardern and the Governor General the Hon Patsy Reddy.

The meeting with the Prime Minister was an opportunity to thank her for New Zealand's principled position on the Israeli-Palestinian conflict and to invite her to visit Palestine in the near future.

Ambassador Abdulhadi also met with Deputy Secretary of the Ministry of Foreign Affairs and Trade Mr Jeff Langley and his Middle East team to discuss in depth the current developments on Israel and Palestine and, in particular, the negative consequences of President Trump’s decisions to recognize Jerusalem as the capital of Israel and to cut UNRWA funding.

In this context, the Ambassador asked the New Zealand Government to immediately recognize the State of Palestine and to increase its financial assurance to the Palestinian refugees through UNRWA.