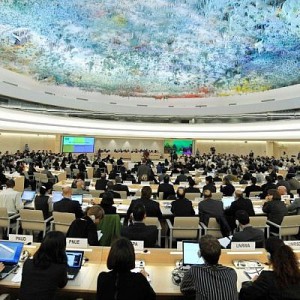 1. Israeli settlements in the occupied Palestinian territories, including East Jerusalem, are illegal.

2. The right of the Palestinian people to self-determination.

3. The situation of human rights in the occupied Palestinian territories, including East Jerusalem.

4. Ensuring accountability and justice for all violations of international law in the OPT, including East Jerusalem.

“On behalf of the State of Palestine and the Palestinian people and leadership, we extend our sincere gratitude to the members of the UNHRC who chose to stand on the side of peace and justice.

By adopting these four resolutions, the Council has reaffirmed our people’s right to independence and to a sovereign state on the 1967 borders with East Jerusalem as its capital.

Despite intensive pressure and threats from the U.S. administration and its Israeli partner, most members stood their ground and refused to abolish Article VII which deals with the Israeli occupation's policies and violations against the Palestinian people.

The adoption of these resolutions by principled members of the Council is a sign of commitment to genuine peace, security and justice as well as a recognition of the many injustices that the Palestinian people suffer under Israeli occupation.

These resolutions once again indicate a positive engagement by members of the international community to hold Israel accountable for its continuing violations and impunity.

This must be followed by punitive measures to put an end to these violations; for Israel to understand that there is a price to be paid for its occupation and that the Palestinians deserve the protection of the law.

As part of the process of rectification, we also urge all those countries who have not done so yet to recognize the State of Palestine and to bring Israel to compliance with the norms and imperatives of civil, moral and legal behavior."