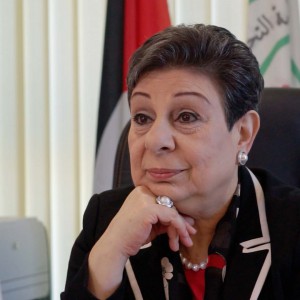 PLO Executive Committee Member Dr. Hanan Ashrawi condemned yesterday’s passing of the first reading of a draft law that defines Israel ‘as the Jewish and democratic nation state of the Jewish people’ and affirms ‘the right of the Jewish people to self-determination in their historic homeland’:

“Once again, Israel has reaffirmed its intent of institutionalizing discrimination, racism and xenophobia against all aspects of Palestinian life, transforming the military occupation into a deliberate sectarian confrontation and establishing ideological beliefs as official policy. The proposed legislation is illegal by all measures of international law, and it violates the most basic principles of human rights and democracy that staunchly oppose racism.

Undoubtedly, Israel is working to achieve ethnic purity and prolong the occupation and its ongoing system of apartheid and ethnic cleansing, ridding itself of any responsibility towards the Palestinians and eradicating the right of return for Palestinian refugees.

If passed, this bill would deprive the Palestinian citizens of Israel of their economic, political and social rights, turning them into second-class and third-class citizens.

In light of the serious escalation of Israeli efforts to impose all of ‘Greater Israel’ on all of historic Palestine, it is incumbent upon all members of the international community to intervene immediately, not just to prevent further deterioration but to also undo the damage and rectify the situation as soon as possible.”