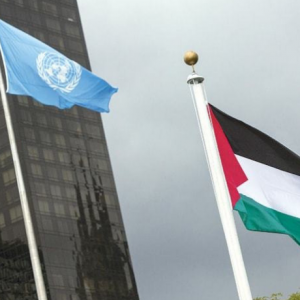 PLO Executive Committee Member Dr. Hanan Ashrawi welcomed the United Nations General Assembly vote in favor of appointing Palestine to chair the Group of 77, the largest intergovernmental organization of developing nations at the UN. The resolution was adopted by an overwhelming vote of 146 in favor, 3 against and 15 abstentions:

“On behalf of the Palestinian leadership and the people of Palestine, we extend our gratitude to the 146 nations who stood on the side of peace and justice and voted in favor of such a significant political move which reaffirms the international community’s commitment to enhancing the status of Palestine in the global arena.

It is our hope that this positive step will be followed by serious and concrete measures to ensure protection for the Palestinian people and accountability for Israel’s persistent violations of international law and its crimes against humanity, and to guarantee the establishment of an independent and sovereign Palestinian state on the 1967 borders with East Jerusalem as its capital.

Countries like the United States and Australia who voted against the resolution are subverting the global rule of law and international consensus. Rather than provide blanket support for Israel’s immoral behavior and its total disdain for international law and Palestinian human rights, the governments of United States and Australia would do better to recognize Palestine and end the military occupation once and for all.”