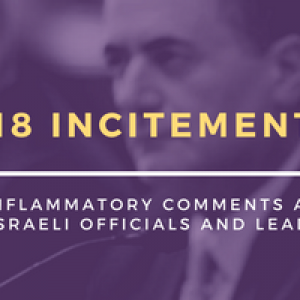 “The real incitement stems from Israel’s military occupation of Palestine and its enslavement of an entire nation. The Israeli hardline extremist government led by Benjamin Netanyahu is responsible for generating a culture of hate and racism in Israel, inciting violence and feeding extremism. Updated regularly, this report includes samples of recent derogatory and inflammatory comments and incitement by Israeli government officials and leaders specifically meant to distort reality and mislead public opinion.”

Examples of recent inflammatory comments and incitement by Israeli officials and leaders:

Prime Minister Benjamin Netanyahu: “The establishment of the state created a national center for our people in which there is no assimilation and in which there has been constant growth. It has given us strength. It has infused us with spirit. It ensures our future.” (April 20, 2018)

“Recognizing reality is the way you build peace. You cannot build peace on a foundation of lies because it crashes on the rocks of reality. It’s important to establish those principles that will ultimately guide peace: that Israel has a capital, that the Jewish people have had a capital for 3,000 years [sic] and that it’s called Jerusalem - is uncontestable. It’s time to recognize that fact.” (April 19, 2018)

Defense Minister Avigdor Lieberman: “Yesterday [April 20] we saw the IDF is the most moral army in the world, making the utmost effort to avoid harming innocent people. I repeat to the residents of Gaza, a tip for longevity: Stay away from the fence.” (April 21, 2018)

Israeli soldiers did what was necessary. I think all our soldiers deserve a medal [for killing unarmed Palestinian protestors]. As for a commission of inquiry – there won’t be one. (April 1, 2018)

Culture and Sport Minister Miri Regev: “We returned to Samaria [occupied West Bank], we came home. Even if they dig very deep, they will not find a Palestinian coin here. On the other hand, we see our history here - the ancient Kingdom of Israel, which was here in Sebastia.” (April 4, 2018)

“We need to build [settlements], and to return Jewish life to these areas. We will ensure that there are building [settlement] permits for industrial zones, because life requires work and employment.” (April 4, 2018)

Science, Technology and Space Minister Ofir Akunis: “He [unarmed protestor in Gaza] is not an innocent civilian who is coming to seek peace. I’m sure of that.” (April 10, 2018)

Regional Cooperation Minister Tzachi Hanegbi: “[US President Donald Trump] did not prejudge future negotiations or draw borders. He recognized the historical reality of the Jewish people’s connection to Jerusalem. It is in fact, the capital of the state of Israel.” (April 29, 2018)

Deputy Foreign Minister Tzipi Hotovely: “The majority of the people understand that dividing the country would be a disaster. The polarization is mainly in the media and on social media.” (April 19, 2018)

Deputy Knesset Speaker Bezalel Smotrich (Habayit Hayehudi): “In my opinion, she [Palestinian teenager and prisoner Ahed Tamimi] should have gotten a bullet, at least in the kneecap... That would have put her under house arrest for the rest of her life.” (April 21, 2018)

Knesset Member Avi Dichter (Likud): “Anyone who does not belong to the Jewish nation cannot define the State of Israel as his nation-state.” (April 30, 2018)

“The Palestinians will not be able to define Israel as their nation-state. The nation-state law is the insurance policy we are leaving for the next generation.” (April 30, 2018)

Israeli Ambassador to Ghana Ami Mehel: “There is no OPT [occupied Palestinian territory], there is no Palestine, there was never Palestine. It’s Israel, he [Ghanaian parliamentarian Ras Mubarak] wants to enter Israel!” (April 11, 2018)

Former Education and Interior Minister Gideon Sa’ar: “We don’t want to control the Palestinians… and the truth is, we don’t any more [sic].” (April 29, 2018)

“Hamas in the Gaza strip and the Palestinian Authority in the West Bank are responsible over the welfare of their people, but cannot be allowed to build a sovereign nation while Israel’s security concerns remain unaddressed.” (April 29, 2018)