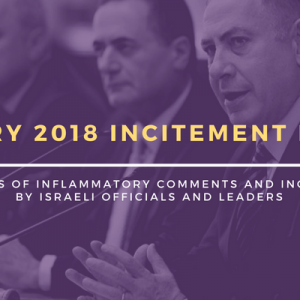 Prime Minister Benjamin Netanyahu: “...we will control security west of the Jordan (river)... that is I think the first condition. Whether or not it's defined as a state when we have the military control is another matter, but I'd rather not discuss labels, but substance.” (January 30, 2018)

“Returning to our homeland - that’s what we’re doing here, in the heart of the Land of Israel... It’s a festive day to Samaria [Occupied West Bank] and the State of Israel.” (January 30, 2018)

Defense Minister Avigdor Liberman: “All we can do is work on managing the conflict with the Palestinians... the only solution, for now, is to reach a more limited agreement. A permanent peace deal is too ambitious right now.” (January 31, 2018)

“I have instructed the heads of the Defense Ministry to assist the family and the residents [settlers] of [the outpost of] Havat Gilad. I have also ordered an examination of the possibility of legalizing [the outpost of] Havat Gilad and making it a community among the other settlements in Judea and Samaria [Occupied West Bank].” (January 14, 2018)

“We have undertaken to hold a number of bursts per year for building permits in Judea and Samaria [Occupied West Bank] and we stand by our word.The 1,285 new housing units we will approve tomorrow [January 10] at the Supreme Planning Council for marketing are for immediate [settlement] construction in 2018. Among other things, large neighborhoods have been approved in [the settlements of] Ariel, Emanuel and more.” (January 9, 2018)

Justice Minister Ayelet Shaked: “[U.S. Vice President Mike Pence] expressed the simple truth: The Land of Israel belongs to the Jewish people and Jerusalem has been the capital of Israel for 3,000 years and will remain so forever. I'm waiting together with all Israeli citizens for the transfer of the American embassy to the capital of Israel by the end of 2019.” (January 22, 2018)

“450,000 residents [settlers] of Judea and Samaria [Occupied West Bank] are entitled to the same rights and have the same obligations as the rest of the citizens of the State of Israel.  I will insist that a government-sponsored bill be discussed by the committee only if it includes references to this subject. We have corrected an injustice that has lasted for 50 years.” (January 22, 2018)

Education Minister and Diaspora Affairs Minister Naftali Bennett: “In the meantime, there is a state of Palestine that's been established in Gaza... There is not going to be a second Palestine between Jordan River and the sea, but we are willing to discuss many other creative options, but we're not going to commit national suicide.” (January 30, 2018)

“In the meantime, the reality has changed completely and everyone understands that the vision of a Palestinian state has dropped from the agenda, and therefore we have to move to an optimistic and pioneering message of sovereignty. A national and political consensus is emerging. My friend, Finance Minister Moshe Kahlon, also supports the immediate application of sovereignty over the [settlement] blocs. The time for sovereignty has arrived, and it's time to bring this idea from potential to reality. We're in a very unique window on this matter.” (January 15, 2018)

“We must make clear that every murder will be met with immediate [settlement] construction. Regulating [the status of the outpost of] Havat Gilad and building there is the most painful price Israel can exact to deter terrorists from undertaking the next attack.” (January 10, 2018)

“Just now we ensured that Jerusalem will be united forever. We initiated the law that guards Jerusalem so that it cannot be divided without a huge majority of 80 MKs.” (January 2, 2018)

“The Mount of Olives, the Old City, the Temple Mount and the City of David will remain in our hands forever. There will be no more political maneuvers that will allow to tear our capital apart. This is also Israel's response to the shameful United Nations vote against Jerusalem. A holiday for Israel!” (January 2, 2018)

Agriculture Minister Uri Ariel: “Its [sic] time [the outpost of] Havat Gilad was normalized and those [settlers] living there are granted the rights of all citizens in Israel, just as they serve in the IDF and fulfill all of their obligations.” (January 14, 2018)

“What is this special weapon we have that we fire and see pillars of smoke and fire, but nobody gets hurt? It is time for there to be injuries and deaths as well.” (January 10, 2018)

Culture and Sports Minister Miri Regev: “This is an impossible situation, and residents [settlers] of [the outpost of] Havat Gilad should live with the same rights and obligations that people living in Kiryat Shmona, Dimona, Tel Aviv, and Caesarea have.” (January 11, 2018)

“... I want to say unequivocally: This is our land; our duty is to apply sovereignty [in the outposts], once they realize there is no hope, their motivation will disappear.” (January 11, 2018)

Tourism Minister Yariv Levin: “... the right thing to do is to apply our sovereignty over all of the Land of Israel, including territories east of the Jordan.” (January 3, 2018)

Deputy Foreign Minister Tzipi Hotovely: “The UNRWA era is over. I want to raise this issue with every country that donates to UNRWA and demand that they divert their money to real humanitarian organizations and stop cultivating the Palestinian right of return that perpetuates the conflict. For many years, the international community simply ignored the Palestinian demand for return [to the State of Israel] and created a distorted reality in which the Palestinians continue to be considered refugees who wish to return to Jaffa, Acre, Lod and Ramle, and in fact aspire to the destruction of the State of Israel.” (January 21, 2018)

“The government must legalize [the outpost of] Havat Gilad and made it a place where everyone will flourish. This is a young community whose homes should be filled with children and life.” (January 21, 2018)

Deputy Defense Minister Eli Ben Dahan: “There is no doubt that the Arab MKs have crossed every boundary. Instead of worrying about the Arab minority in the State of Israel, they represent the Palestinian people, an invented people that does not exist, that has no foundations, and they only about care about this.” (January 23, 2018)

“I'm sorry to disappoint the leftists sitting here, but the residents [settlers] of Judea and Samaria [Occupied West Bank] are here to stay forever.” (January 3, 2018)

“If the Palestinians refuse to talk, we [Israel] will benefit. The state of Israel will grow and the settlement project will grow.” (January 3, 2018)

Deputy Minister for Diplomacy and Knesset Member (Kulanu): “The Tamimi family and those claiming to be part of the Tamimi family have been provoking Israeli soldiers for many, many years now. The children were chosen on the basis of their external look, to look Western, freckled, and blond-haired. They were dressed as Westerners. They don’t dress the way children dress in the [Occupied] West Bank, for a very specific purpose: to get soldiers to react violently to them, to take pictures of this violence and to spread it around the world in order to delegitimize, discredit the state of Israel.” (January 24, 2018)

Knesset Speaker Yuli-Yoel Edelstein (Likud): “Unfortunately, many countries voted against US President Donald Trump`s declaration on Israel`s capital, Jerusalem. Argentina did not join those countries ,which questioned the fact that Jerusalem has been Israel`s capital for the past 3,000 years, and will remain so all eternity.” (January 10, 2018)

Knesset House Committee Chairman MK Miki Zohar (Likud): [Joint List MK] Ahmed Tibi said I was appointed chairman of the House Committee, yet I'm not prepared for Arabs to run the country. I insist that this state, the State of Israel, be run only by Jews. Arabs are invited to live here quietly without engaging in terror... When I say 'run the State,' I mean the premiership. If Ahmed Tibi would be the prime minister, this wouldn't be the State of Israel." (January 22, 2018)

Knesset Member Oren Hazan (Likud): “I have always said that the Joint Arab List is a criminal cabal. Today I finally received validation from the police and I am convinced that in the end the Balad terrorists will find themselves behind bars along with the rest of their friends, who enjoy five-star prison conditions at our expense, that of the citizens of Israel. They are, first and foremost, terrorists, not Knesset members, who should have been in jail long ago and I hope that the Knesset's obsequious fawning vis a vis the Joint Arab List won't save them.” (January 23, 2018)

Knesset Member Nurit Koren (Likud): “It was a bit bothersome that [U.S. Vice President Mike Pence] spoke about the two-state solution. We need to sit down and talk because we will only achieve peace through dialogue, but first of all we need recognition of the State of Israel, of its sovereignty and of our right to live here.” (January 22, 2018)

Knesset Member Sharren Haskel (Likud): The Jordan Valley is a strategic, security asset of the State of Israel and there is a national and political consensus about it. Even in the most right-wing and left-wing agreement, the Jordan Valley is included as an integral part of our country. The residents [settlers] of the Jordan Valley are a security buffer on Israel's border and they risk their lives, yet there is complete inequality between them and the rest of the residents of the country. The residents [settlers] here are considered second-class citizens and have obligations, but no rights. This is an absurdity that must be corrected immediately, and the sooner the better. (January 23, 2018)

Knesset Member Nissan Slomiansky (Jewish Home): “... The problem is that maybe we could have prevented the accident, and the roads in Judea and Samaria [Occupied West Bank] must be fixed. We're already crying and pleading with all the enforcement authorities to do something. People drive on these roads like madmen, mainly the Arabs, besides that fact that the roads aren't in good condition. The Arabs drive like maniacs, as if their lives were worthless ... this mustn't be allowed to happen. (January 24, 2018)

Knesset Member Yoav Kisch (Likud): “It's time to put the Likud Central Committee's resolution [to annex the Occupied West Bank and impose Israeli “sovereignty” on illegal Jewish settlements] into practice and begin applying sovereignty over the settlement areas in Judea and Samaria [Occupied West Bank]. There will be no better historic opportunity to do this.” (January 28, 2018)

Former Internal Affairs Minister Gideon Sa'ar: “The two-state solution has become merely a two-state slogan. Forming a Palestinian state now is a crazy idea that would distance peace and security. We cannot accept a Palestinian mini-state in Judea and Samaria [Occupied West Bank]. We don’t want one state either. The current situation is better than alternatives currently on the table.” (January 31, 2018)