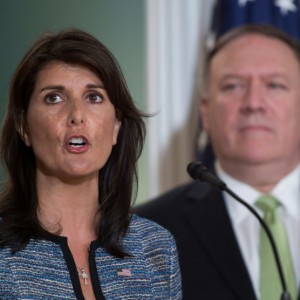 “It is not surprising that the US administration, which gives orders to snatch crying babies from their parents’ arms and partners with Israel, a cruel and belligerent military occupier that holds an entire nation captive, has withdrawn from the United Nations Human Rights Council (UNHRC).

US Ambassador to the UN Nikki Haley’s claim that the UNHRC is ‘a hypocritical and self-serving organization that makes a mockery of human rights’ is both deceptive and blatantly untrue. The UNHRC is an effective international body with an active mandate to promote and protect human rights around the world.

Since US President Donald Trump assumed office in 2017, his administration has targeted multilateral and regional organizations and agreements. Most notably, it has withdrawn from UNESCO, the Paris Agreement under the United Nations Framework Convention on Climate Change, the Joint Comprehensive Plan of Action, and the Trans-Pacific Partnership, and it has attacked NATO and Europe while violating international law and UN resolutions concerning the Occupied Palestinian Territories. Clearly, the United States is subverting international law, its instruments and mechanisms for the sake of maintaining the impunity of Israel, the only remaining military occupier in the world.

The problem is not with the just and functioning global order, but with Israel, which persists in committing lethal violations and war crimes against the Palestinian people. The US administration’s blind commitment to Israel together with its proven track record of human rights violations will succeed in isolating it on the international arena and continue to undermine its influence and standing globally.

The United States would do better to rectify the situation and bring such unconscionable and reprehensible behavior to an end, rather than to target precisely those organizations and institutions entrusted with holding the violator to account and protecting the victim.”