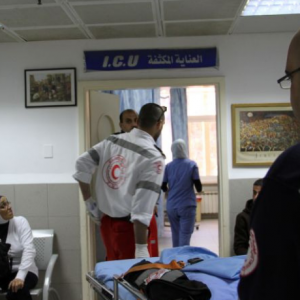 "By cutting vital funds to hospitals in East Jerusalem, which include the Augusta Victoria Hospital and the St. John’s Ophthalmic Hospital, the US administration is threatening to cause serious instability and grave harm to thousands of Palestinian patients and their families from across the West Bank and the Gaza Strip, and hurting the livelihood of thousands of workers in the Palestinian healthcare sector in the occupied city.

Such an act of political blackmail goes against the norms of human decency and morality. Politics should not trump humanity or harm a vulnerable people in need of support and protection.

With its recent disastrous and irresponsible decision-making and policies, including defunding UNRWA and redefining the status of Palestinian refugees, recognizing occupied Jerusalem as the capital of Israel, relocating the American Embassy from Tel Aviv to Jerusalem, refusing to refer to the 1967 borders and the two-state solution, and refraining from addressing the illegality of settlements, the US is undermining the global rule of law and its standing, credibility, security, and interests around the world.

Such spiteful and dangerous American moves will further enable Israel to persist with its systematic plans targeting occupied Jerusalem and the Palestinian people as a whole with full impunity.

The key to any proper solution is ending the military occupation and enabling the Palestinians to exercise sovereignty and control over their own land and resources. With this, we would be able to build a thriving economy without any foreign assistance.

The Palestinian people never chose to have the State of Israel created on their land; it was the decision of the international community which caused us great hardship and deprivation. Therefore, we reiterate our call to all members of the international community to assume their legal and human responsibilities and exhibit the political will necessary to hold Israel to account before the requirements for a just peace and stability are destroyed indefinitely."