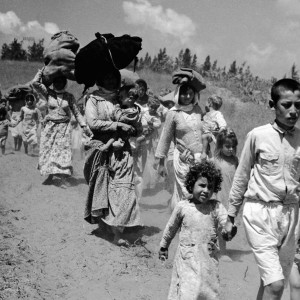 “On the eve of the seventieth anniversary of the Palestinian Nakba (“catastrophe”), a grave historical injustice that continues today, the U.S. will officially relocate its embassy from Tel Aviv to occupied Jerusalem, reneging on longstanding American commitments and policies and violating the most basic requisites of justice and legality.

For the past seven decades, Palestinians have been subjected to countless injustices and an ongoing cycle of destruction, displacement and dispossession. With blanket support from the United States, Israel has been given a free hand to persist in the total annexation of Palestinian Jerusalem and pursue the historical, political, cultural, demographic, and geographic transformation of the occupied city, erasing its Palestinian presence and identity.

By illegally recognizing Jerusalem as Israel’s capital and relocating the embassy, thereby taking the issue of Jerusalem “off the table,” U.S. President Donald Trump and his administration are becoming complicit in Israeli lawlessness and war crimes and allowing the Nakba to continue unfettered.

During the human tragedy of Nakba, Israel destroyed 531 Palestinian towns and villages and committed at least 33 massacres, and more than 800,000 Palestinians were uprooted and expelled to live as refugees at the mercy of others.

Today, more than six million Palestinian refugees reside in the Occupied Palestinian Territory and in exile.  Palestinian refugees have suffered for far too long, and the onus is on all members of the international community to recognize their plight and bring Israel to comply with international law and conventions, including the United Nations General Assembly Resolution 194 (1948), the 1951 Geneva Convention Relating to the Status of Refugees, the International Covenant on Civil and Political Rights (1966), and the Universal Declaration of Human Rights (1948). Rather than cruelly target the most vulnerable segment of the Palestinian people and deprive the refugees of the right to a dignified life, the U.S. would do better to unfreeze funding to UNRWA and support the just cause of Palestine and Palestinian refugees.

We call on the United States to rescind its disastrous and irresponsible decision to move the U.S. embassy to occupied Jerusalem and to cease and desist from further provocative and illegal decisions and moves aimed to preempt the outcome of permanent status issues. It is time for the U.S. administration and members of Congress to end their practice of blackmail, extortion and threats against the Palestinian people and stop blaming an enslaved nation that is already living under a military occupation and suffering from deliberate and systematic acts of violence, colonialism and apartheid.

International condemnation is not enough. We urge global leaders to respect international law and humanitarian principles and to not participate in tomorrow's opening ceremony of the U.S. Embassy in occupied Jerusalem; rather, they should assume an active stand against the unlawful measure and defend the global rule of law and justice by holding Israel to account with punitive measures and sanctions.

We also continue to pay tribute to the victims of Israel’s persistent policies of destruction and dehumanization. Despite American and Israeli efforts to violate the status quo and the legal status of occupied Jerusalem, we will remain steadfast and resilient in the face of the belligerent occupier and continue the nonviolent struggle for freedom, independence and dignity.”