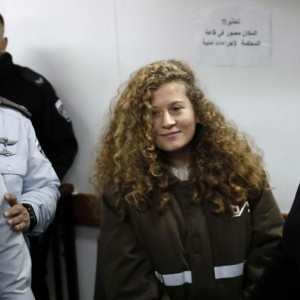 The decision by the Israeli Ofer military court to extend the detention of 16-year-old Ahed Tamimi is both illegal and morally repulsive.

On 15 December, Ahed and her family were peacefully protesting the US administration’s decision to recognise Jerusalem as the capital of Israel when Ahed’s 14-year-old cousin Mohammed was shot in the head by an Israeli soldier at close range.

Later that day, Ahed confronted Israeli soldiers when they entered the garden of her family home. She told them to leave before slapping and shoving an Israeli soldier, who was heavily-armed and wearing full military protective gear.

On the night of 19 December, the Tamimi family home was raided by Israeli soldiers, who then arrested Ahed, along with her mother.

Ahed has since been held in Israeli military custody awaiting trial, with her detention being extended multiple times. She faces charges of aggravated assault, obstructing the work of soldiers, and incitement, for which she faces up to ten years imprisonment. She will likely be convicted, as in the Israeli military court system the conviction rate for Palestinian youth is 99.2%.

Ahed’s story is all too familiar to Palestinians, with an estimated 350 Palestinian children currently being held in Israeli military detention. Defense for Children International have reported that 97% of these children are interrogated in the absence of a lawyer or family member, 75.5% are subject to physical assault, with reports of electric shock torture and threats of sexual assault.

As well as being morally repulsive, this system of injustice is in blatant violation of international law, in particular the Convention on the Rights of the Child and the Fourth Geneva Convention.

As such, we ask the Australian Government to uphold the principles enshrined in international law by strongly urging the Israeli Government to release Ahed Tamimi and her family members, as well as question the legality of the Israeli military court system that continues to destroy the futures of Palestinian children.