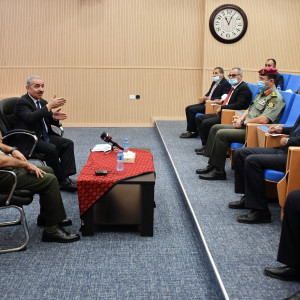 Speaking to Palestinian security officers at his office in Ramallah, Shtayyeh said that the normalization of relations by some Arab countries with Israel is “painful and a blow to Arab consensus.”

However, he added, “it will not change anything from the reality since the battle between us and the occupiers is over our land and our rights and as long as our internal home is in order and our institutions are strong, the more we will be able to persevere and defeat the schemes of the occupiers.”

He said, “We live a complicated political scene. Yet, we have lived through more difficult times and we were able to persevere and achieved a lot, but most importantly we have been able to thwart many schemes aimed to end our cause and the rights of our people."

The Prime Minister said the US-brokered deal of the century came in three levels: “The punitive measures by the United States in order to defeat us in order to accept what is offered to us, the normalization of the Arabs (and Israel), and the implementation of the (Israeli) annexation (of the Palestinian territories) to end of our cause, which we were able to foil.”

Original link to Palestine News and Info Agency (WAFA) article in English below: