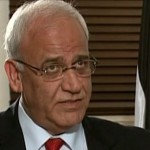 We strongly condemn the latest Israeli announcement to expand its illegal settlements in and around Occupied East Jerusalem, the capital of the State of Palestine. This announcement amounts to evidence of an intent to further commit crimes defined by and punishable under international law.

Dr. Saeb calls on the International community to take decisive action in order to save the two-state solution from the colonial expansionism of the State of Israel, including by recognizing the State of Palestine on the 1967 border, by supporting our Security Council efforts to put a deadline to end the Israeli occupation, by banning all settlement products and by divesting from all organizations and companies linked directly or indirectly to the Israeli occupation, colonization and Apartheid policies.

PLO Executive Committee member, Dr. Hanan Ashrawi, stated, “We strongly denounce the deliberate execution of Palestinian-American teenager, Orwa Abd al-Wahhab Hammad (14) who was shot and killed with live ammunition in the Palestinian village of Silwad on October 24.”
She added: "“We call on the United Nations, the European Union, the United States, and other members of the international community to take immediate action and adopt the necessary punitive measures required to hold Israel accountable for its use of live ammunition and for the extrajudicial killings of Palestinian civilians, among other violations of international and humanitarian law.” 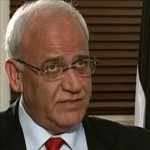 Mr Erekat said in his statement: 'We strongly reject and condemn Mr. Netanyahu’s unfounded and inflammatory statement regarding yesterday’s incident in Occupied East Jerusalem.
Mr. Netanyahu declared that President Abbas’ “partners in government” were behind the act and that the President himself “only a few days ago incited towards a terrorist attack in Jerusalem.”
Mr. Netanyahu has no credibility left to lose, three weeks after he declared that the Obama administration was “against American values” and “anti-peace” for condemning his government’s approval of nearly 3,000 new settlement housing units in occupied East Jerusalem. But even by his standards, Mr. Netanyahu’s statement last tonight represents a dangerous new low. 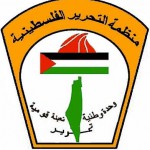 This is the official policy of the Israeli government coalition, a coalition which, in less than two years, has shown itself to be one of the most extreme in history. Mr. Ya’alon has confirmed that the Israeli government does not seek a two-state solution, but rather a way to manage the situation. This has always been, and remains, the line of Netanyahu’s government. In stark contrast to the positions of Palestine and the entire international community, the ruling coalition in Israel has made clear that it has no intention of seeing an independent state of Palestine alongside the state of Israel. Rather, the Israeli government aims to consolidate the occupation that continues to control the lives of the Palestinian people. 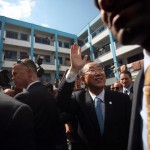 Visiting Gaza on Tuesday for the first time since this summer’s 50-day war between Israel and Hamas, the secretary general of the United Nations, Ban Ki-moon, said the destruction was “beyond description,” even as reconstruction efforts were underway for the first time.

“No amount of Security Council sessions, reports or briefings could have prepared me for what I witnessed today,” Mr. Ban told reporters after touring some of the most badly damaged areas of the Gaza Strip and visiting a United Nations school that was shelled during the fighting. 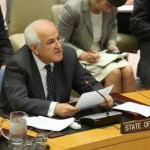 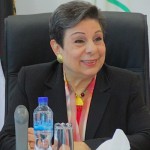 PLO Executive Committee member, Dr. Hanan Ashrawi, welcomed the vote of the British Parliament urging its government to recognize the State of Palestine: “On behalf of the Palestinian people and its leadership, I would like to thank everyone who worked to bring about this vote. The recognition of Palestine and its people is both a principled decision and a significant step towards justice and peace.” 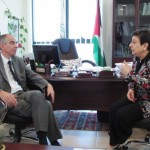 PLO Executive Committee member, Dr. Hanan Ashrawi, met with French Consul General, Hervé Magro, at the PLO Headquarters in Ramallah and stressed the following:
“The status quo is untenable; we are witnessing the end of the two-state solution. Thus, it is of the utmost urgency for Europe and other members of the international community to recognize the State of Palestine, to adopt bold political steps and undertake a serious initiative to address Israel’s ongoing violations of international law, and to put an end to Israel’s impunity and its military occupation of Palestine.” 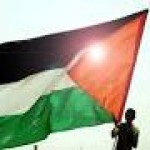 Bishop Declan Lang, Chair of the Bishops' Conference Department for International Affairs, and the Church of England's Lead Bishop for Foreign Affairs, the Rt Revd Christopher Cocksworth, have released a joint statement on the parliamentary motion to recognise Palestine as an independent state. 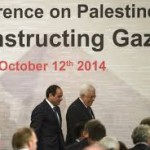 Palestinian presidan and Chairman of the PLO Executive Committee started his speech by showing gratitude for the participating sides.

"I would like first to express my deepest gratitude and appreciation for the chairs of this conference, for all cosponsors, and for all the states and organizations present here today. Your acceptance of this invitation and your presence here, goes to show both the nobility of your intentions and your willingness to support the reconstruction of the Gaza Strip."